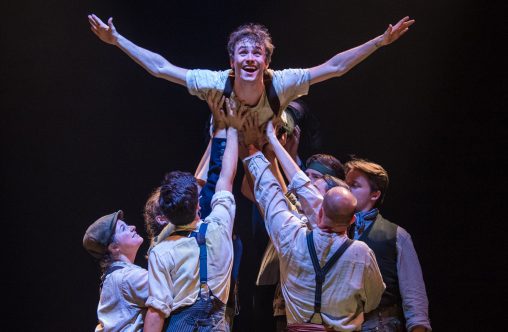 Wright State Theatre’s production of the Tony Award-winning fantasy story “Peter and the Starcatcher” runs Sept. 26 to Oct. 6 in the Festival Playhouse in the Creative Arts Center. (Photos by Erin Pence)

Wright State University Theatre opens its 2019–20 season with the family-friendly fantasy story “Peter and the Starcatcher” Sept. 26 to Oct. 6 in the Festival Playhouse in the Creative Arts Center.

For tickets and theatre information call the Box Office at 937-775-2500 or purchase tickets online.

Based on the 2004 novel by Dave Barry and Ridley Pearson, “Peter and the Starcatcher” was adapted for the stage by Rick Elice. It tells the tale of how a miserable orphan became Peter Pan while also providing backstories for Mrs. Darling, Tinker Bell and Captain Hook.

The production premiered in San Diego in 2009 and opened on Broadway in 2012. It received 11 nominations Tony Award, winning five.

The Dayton Power and Light Foundation is the presenting sponsor for “Peter and the Starcatcher.”

The Wright State Theatre season continues with the hit musical “The Addams Family” Oct. 31 to Nov. 17 in the Festival Playhouse. The season also includes: