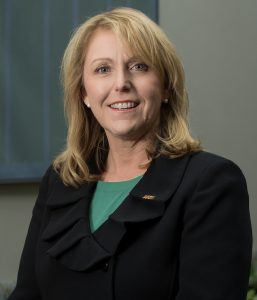 Susan Edwards, who joined Wright State in 2018 as provost, will become the university’s eighth president on Jan. 1.

One of the largest universities in the Dayton region has a new leader. Wright State University’s board of trustees has named Provost Susan Edwards as its next president. The decision comes shortly following the announcement of President Cheryl Shrader’s plan to retire from the position.

Edwards will assume the role Jan. 1 and will serve as the university’s eighth president.

“After carefully considering the best options for the university and after discussing the matter with employee and student leaders, we believe Dr. Edwards is the right person to take the university forward,” said Sean Fitzpatrick, chair of the board of trustees. “We are confident Dr. Edwards will keep the university focused on providing an excellent education for our students and position Wright State to better serve the economic needs of the region, particularly in the high demand areas of health care, technology and business, as well as supporting the employment, educational and research needs of Wright-Patterson Air Force Base.”

Edwards said she is proud of Wright State, how it serves students and the region and is honored and humbled to serve the university and its partners as Wright State’s eighth president.

“We have so much going for us. We are committed to providing a high quality, high outcome education,” she said. “And I’ve enjoyed my opportunity to engage with faculty, staff and students and continue conversations this semester so that we may work together to move the university forward.”

The announcement comes after several tumultuous years for the university’s finances. Two years ago, Wright State cut nearly $31 million from its 2018 budget to correct roughly $38 million in overspending, causing 57 layoffs and organizational changes for the school.

At the time, some trustees advocated for even larger spending reductions. In August 2017, the university hired a budget architect to help remediate its financial troubles. Though budget-cutting measures helped Wright State recoup some of its net revenue losses, which peaked at $91.2 million in 2017 after a five-year budget shortfall, it did not help the school rebuild its annual revenue stream, which fell by roughly $30 million between 2017 and 2019.

The school also saw several consecutive years of enrollment decline, according to DBJ research. The university’s total enrollment fell by more than 2,500 students between 2015 and 2018 — nearly a 14 percent drop.

Wright State also endured the longest faculty strike in Ohio’s history earlier this year, which ended after 20 days when the university’s board of trustees unanimously approved a term sheet agreement that included a unified health care plan and some annual pay raises.

Edwards, who was named provost in May 2018, said the university must continue to focus on enrollment, retention and bolstering university partnerships.

“Student success is the umbrella; retention, experiential learning and high quality classroom education are the three things that fall underneath it,” she said.

Edwards also is committed to fostering a welcome and inclusive campus for students, faculty and staff.

“We have made a concerted effort to recruit a more diverse student body. This year’s incoming freshman class is the most diverse in Wright State’s history,” she said. “And I wish that to continue.”

As president, Edwards is looking forward to improving relations with the community and being very vocal about telling the Wright State story.

Prior to coming to Wright State, Edwards was vice provost for faculty affairs and professor of biology at Appalachian State University in Boone, North Carolina. She was responsible for overseeing all areas of faculty evaluation and development and served as the academic affairs liaison on all personnel matters.

In 2007, Edwards left her native Australia to join the Department of Biology at Appalachian State.