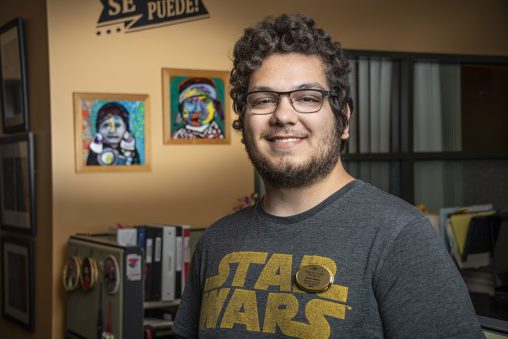 When Aaron Osborn goes to visit his grandmother, he travels to the Arctic Circle.

The president of Wright State University’s Native American Student Association is one-quarter Inuit, an indigenous people that inhabit the Arctic regions of Canada, Greenland and Alaska.

“I’ve been up there a few times and it’s really beautiful,” he said.

Osborn, whose grandfather is Hawaiian, is attempting to sharpen his ability to speak Inuit.

“I’m trying to get better at it so I can have conversations with my grandparents because they speak it fluently,” he said. “But it’s hard. The word for newspaper is like 30 letters long.”

When he is not studying Inuit or pursuing a major in social science education, Osborn is working on growing the Native American Student Association.

Nearly 160 Native American students attend Wright State. Osborn says the association is open to all students, not just those who are Native American.

“You don’t have to be Native American to be part of our tribe,” he said. “America is a melting pot and it only works if we mesh everything together and learn from each other.”

He said the association seeks to educate its members about the history and culture of various Native American tribes.

“There is so much history and culture embedded in the thousands of years that the tribes have been around,” he said. “I think it’s important that we recognize the history, the food, the cultures, the religions, the languages of the tribes that are still here today.”

The association has organized a number of events in November to celebrate Native American Heritage Month. It will host presentations, guest speakers, workshops and an arts and crafts event.

“It would be really good for Wright State as a community, as a campus, to learn about Native American heritage because it is not something you typically learn,” he said. “I feel we need to take a minute and appreciate the cultures.”

Wayne Stark, director of workforce development for the Center for Liberal Arts Student Success, serves as the association’s adviser. Stark said the benefit of having a Native American club on campus is that the community is able to hear from and experience the important voices of indigenous peoples.

“It is critical that we do not forget their legacy, contributions to our culture, their history and the ways they still impact our lives today through their culture, food, art and activism,” he said. “We must also be reminded of the plight of many Native Americans living in poverty and dealing with a variety of endemic crime and health issues.”

Stark has a strong background and interest in Native American and Western history. His master’s thesis was on the Mattaponi and Pamunkey Indians of Virginia and his doctoral focus was on the history of the American West, particularly the 19th century.

Stark has an extensive collection of Native American arts and crafts, including southwestern Navajo rugs and pottery from all 19 pueblos. He will be presenting information on his collections on Nov. 21 at 3 p.m. in 161 Millett Hall as part of the WSU Native American Heritage Month events.

Osborn grew up in Wilmington, Ohio. At Wilmington High School he had an internship helping other students with information technology.

After graduating in 2018, he was drawn to Wright State.

“I love Dayton,” he said. “My sister lives in the Oregon District and my other sister lives in Walnut Hills. The culture here in Dayton is amazing. And Wright State is affordable and relatively close to home.”

Osborn originally majored in computer engineering but disliked calculus so he switched majors to cybersecurity. However, he was ultimately drawn to social science education because of his interest in history and politics.

“I’ve always had a fascination with how the U.S. government works and how it interacts with other governments around the world,” he said. “Also, as a Native American, I am interested in some of the history between the Colonists and Native Americans that was swept under the rug.”