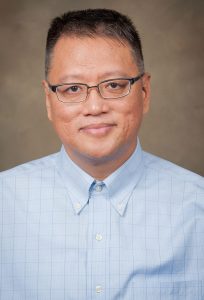 Yang Xiao earned a master’s and a Ph.D. in computer science from Wright State.

The Institute of Electrical and Electronics Engineers (IEEE) has named Wright State University alumnus Yang Xiao as a Fellow for his contributions to wireless medium access control, particularly for WiFi.

The IEEE is the world’s largest association of technical professionals, with more than 400,000 members in 160 countries. It is a leading authority on aerospace systems, computers, telecommunications, biomedical engineering, electric power and consumer electronics.

IEEE Fellow is the highest grade of membership and is bestowed upon a limited number of senior members who have contributed importantly to the advancement or application of engineering, science and technology bringing significant value to society.

Xiao, who earned a master’s and a doctorate in computer science from Wright State, is a professor of computer science at the University of Alabama. He has directed 16 doctoral dissertations and 19 master theses or projects and is currently supervising five Ph.D. students.

Brian Rigling, dean of the Wright State College of Engineering and Computer Science, said the college is extremely proud of the accomplishments of alumni like Xiao.

“Their successes demonstrate that we are small enough to engage students on a personal level but large enough to produce world-class researchers and scholars,” Rigling said.

Xiao grew up in China. His mother is a physician and father a research professor in microbiology. Xiao became interested in computers in high school and was attracted to Wright State because of its strong computer science program.

Xiao said Wright State offered excellent and practical courses that prepared him for his career. He took more than 30 graduate courses in computer science, math and electrical engineering.

After graduating with his Ph.D. in 2001, Xiao worked in the private sector for a few years before returning to academia, where he served as an assistant professor, associate professor and then a full professor in 2013.

The IEEE Grade of Fellow is conferred by the IEEE Board of Directors upon a person with an outstanding record of accomplishments in any of the IEEE fields of interest. The total number selected in any one year cannot exceed one-tenth of 1% of the total voting membership. Dedicated to the advancement of technology, the IEEE publishes 30 percent of the world’s literature in the electrical and electronics engineering and computer science fields, and has developed more than 900 active industry standards.