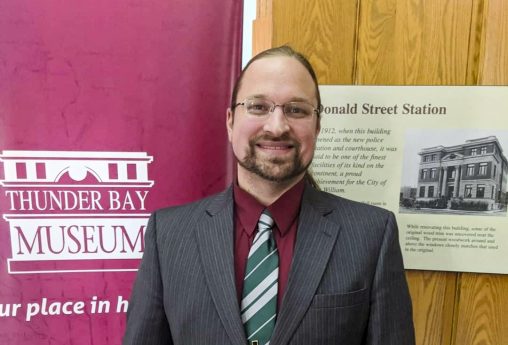 After working at the National Museum of the United States Air Force for 16 years, Scott Bradley, who earned two history degrees from Wright State, took a job leading a museum in Ontario.

For 16 years, Scott Bradley worked as curator at the National Museum of the United States Air Force, overseeing exhibits and projects at the dazzling showcase of military aviation.

Now the Wright State University alumnus has taken on a new and wildly different challenge. In January, he was named executive director of the Thunder Bay Museum in Ontario, Canada, following an extensive international search.

The museum sits on the northern shore of Lake Superior with three floors of galleries displaying the heritage of Thunder Bay and northwestern Ontario. There are relics from the historic and once-thriving fur trade and from what was once the continent’s richest silver mine. There is a replica of a Canadian Pacific Railway station, artworks by local artists and glimpses at Thunder Bay’s musical heritage and military history. There is even the fearsome dinosaur skeleton of Albert the Albertosaurus, a smaller version of Tyrannosaurus rex.

Bradley says the Thunder Bay Museum has been well managed for many decades, is financially healthy and has a good handle on its collection.

“The institution has been fairly progressive in its approach to exhibits and programming over the years, so the road to becoming more inclusive is not a long one,” he said.

Bradley’s goals as executive director include enhancing the museum’s exhibits and educational programs; strengthening accessibility, capacity and the condition of the collections; increasing the number of visitors; ensuring adequate staffing; and increasing the diversity and stability of revenue sources.

Bradley grew up in southeastern Ohio. Until he was 10 years old, he and his family lived on a “back to the earth farm” in Meigs County. His parents built the family’s house out of reclaimed barn parts. There were goats, sheep, chickens, a big garden, a pond and lots of woods.

“It was a rather ideal place for kids to grow up,” he said.

Bradley’s father held a variety of jobs such as driving a delivery truck and working in an electric motor factory before settling into a career working in the lab of the microbiology department at Ohio University.

Bradley would later move to Yellow Springs and attend Yellow Springs High School. After graduating in 1998, he came to Wright State on a swimming scholarship. He initially majored in computer engineering but switched to history in his junior year.

While at Wright State, he landed an internship with the archive at the National Museum of the United States Air Force.

“From there it became clear that a career in museums was possible and I would need a public history degree,” he said. “Wright State had everything I needed to continue that journey, so it was an easy choice.”

Bradley first worked in the Air Force museum archive as an intern and in 2003 was hired as a museum specialist in the Collections Division, mainly working with artifacts doing cataloging and inventory. Then he quickly became curator, overseeing the collections of aviation history and interpreting the material.

He says the most rewarding part of the job was working with military veterans or Air Force civilians and their families on donations or exhibits.

“Because those relationships concerned some of the most important moments in their lives, it was very gratifying to be entrusted with their artifacts and stories,” he said.

His favorite projects included the Warrior Airmen exhibit about Air Force personnel whose careers focused on ground roles to ensure that airpower was effective.

“It was a contemporary exhibit, so many of the people we depicted in the exhibit were still serving,” he said. “Plus the events they had participated in were very recent — some tragic. So that added challenges that were very rewarding to overcome.”

He also enjoyed being the project manager for the design and construction of the new museum building that houses the Presidential and the Space, Research and Development, Global Reach galleries. The building is massive at 224,000 square feet.

“It was a great experience, where I learned a great amount about the construction industry and project management,” he said.

Bradley said at Wright State he punched his ticket to a better life with a degree from a respected program that resulted in good jobs and a high standard of living.

“I had some professors that were pretty tough in my sophomore and junior years,” he said. “That really was a wakeup call and reminder that the only way I was going to succeed was through hard work and self-reliance.”

Bradley’s life extends beyond the walls of museums. His hobby is medieval reenacting with the Society for Creative Anachronism, a group that re-creates pre-17th century skills, arts, combat and culture. He mainly participates in Western full-armored martial arts fighting.