Nearly 1,400 households throng to Wright State for mass food distribution by The Foodbank

A mass food distribution at the Wright State University Nutter Center for those in need drew nearly 1,400 households, with traffic choking nearby roadways and sending a river of vehicles snaking through the parking lot.

The number of households receiving food April 21 at The Foodbank’s drive-through food pantry dwarfed the 600 to 800 households seen in previous years at the Nutter Center.

“We could not have done this without the partnership with Wright State. I’m telling you Raider pride is in full bloom today,” said volunteer Cathy Ponitz. “We couldn’t be prouder of Wright State for saying yes.”

Recent food distributions around the country have drawn large crowds in the wake of the coronavirus (COVID-19) pandemic and resulting business closings and layoffs. More than 22 million people have filed for unemployment aid over the last four weeks nationally. In Ohio, the number of initial jobless claims filed during the same period is 855,197, the Dayton Daily News reported. 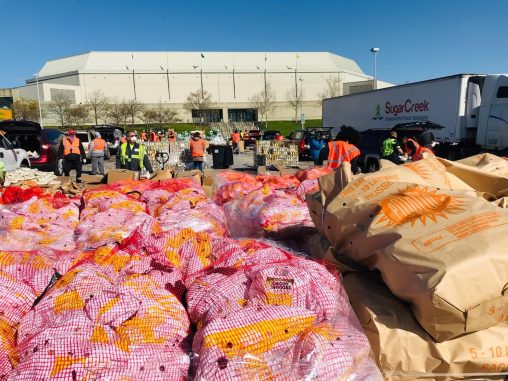 A wide variety of food was handed out, including fresh produce, potatoes, chicken, eggs, pasta, watermelon and cabbage. The amount was enough to feed 4,594 people. (Video by Kris Sproles)

Organizers of the Nutter Center food distribution had asked recipients not to begin lining up until 9 a.m., but several hundred were queued up before then. The distribution began at 10 a.m. and was scheduled to end at noon.

The Foodbank used a no-touch distribution method in loading food into the vehicles’ trunks and backseats. The 30 Foodbank volunteers and 29 members of the Ohio National Guard working with the organization wore protective masks and gloves.

The distribution was heavily covered by the media. “Seeing this many cars out here just lets us know how crucial we really are right now,” National Guards member Harold Owens told WHIO-TV. “It really makes me feel good inside to help them out.”

Several officers from the Wright State and Fairborn police departments also helped with the distribution. Wright State Lt. Kurt Holden said he hopes helping put food on the table alleviates some of the anxiety people are going through.

A wide variety of food was distributed, including fresh produce, potatoes, chicken, eggs, pasta, watermelon and cabbage. The amount was enough to feed 4,594 people.

Catrina Ely, of Dayton, was among those in line to receive food. She was laid off from her factory job because of the coronavirus and it was her first time getting a food distribution. “I have to feed my four children,” she said.

It was also the first time for Kelvin Brown, a Trotwood man who waited in line for an hour. “We need food. It’s hard times,” said Brown. “Thank God that places like this exist.” 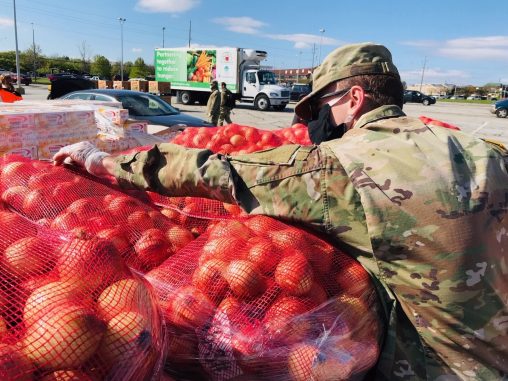 The Foodbank used a no-touch distribution method in loading food into the vehicles’ trunks and backseats.

Wright State has a strong connection with The Foodbank. University employees regularly volunteer at The Foodbank, including during We Serve U Day, a university program that encourages staff and faculty to volunteer in the community.

And for the past six years, Wright State has partnered with The Foodbank to host a mass distribution at the Nutter Center, usually during the summer.

Truesdale, who earned a bachelor’s degree in urban planning and a master of public administration from Wright State, said she realizes how easy it is to have to struggle to make ends meet in this time of uncertainty.