The band, led by Wright State employees and married couple Jamie and Chris Suttle, gained national exposure when its video for “Chasing Smoke” was aired on The Country Network 10 times between June 8 and June 12. TCN is a music video television network available in over 50 markets, reaching 40 million households.

“I’m always excited and extremely humbled and proud when people hear our innermost thoughts and it resonates with them,” Jamie Suttle said.

“Chasing Smoke” has a back-porch feel. In the video, Jamie sings while Chris plays an acoustic guitar near a gas fire pit with stringed lights overhead. “‘Chasing Smoke’ is the most important song that I’ve written so far,” said Suttle.

The lyrics are inspired by Wright State students, faculty and staff, who are chasing their dreams every day at the Creative Arts Center.

“Even though you try and try and may start to kind of burn out on it, if there’s one little spark of hope that something is going in your direction, you’re right back in,” Suttle said. “And so ‘Chasing Smoke’ is kind of like, you see a little smoke in the distance or a spark and you’re right back in it.”

Suttle, the manager of the Creative Arts Center box office, graduated from Wright State in 2010 with a degree in communication. She and Chris Suttle, a design engineer in Computing and Telecommunications Services (CaTS) and a music producer, formed the Jamie Suttle band after performing and producing music separately for years. 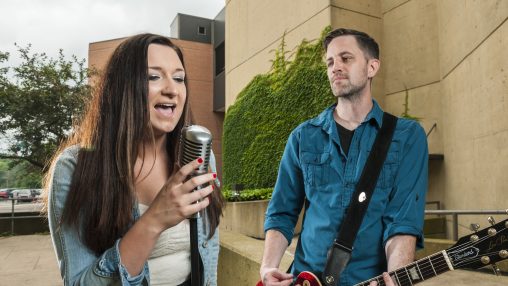 After a late night of helping her husband produce rock music in their Dayton studio, Jamie had a twist for the group. “Hey, I have this idea for a country music song,” she recalled. It only took an hour to write the music and lyrics and a new band was formed.

It’s easy for Jamie to explain her love for country music. She was born in Van Lear, Kentucky, a coal mining town that happens to be the birthplace of country music icon Loretta Lynn. The small town in eastern Kentucky is home to the Coal Miners’ Museum, in whose music room Jamie was recently included, alongside Lynn.

Over the past decade, Jamie Suttle and her band have released several country music albums along with several music videos. While the band performs in Nashville several times a year, most of their gigs are in bars and festivals in the Dayton area.

However, Suttle has had to cancel recent shows because of the coronavirus, including a performance scheduled for the Country Music Room at this year’s ArtsGala. The group has been performing online, so Suttle said the exposure earned by “Chasing Smoke” has been a great way to connect with fans.

“I was really excited to have the video end up there,” she said.

Even after having a video air on TCN and gaining new fans on the band’s social media pages, Suttle said graduating with a communication degree from Wright State and working in the Creative Arts Center remain the best things that have happened to her professionally.

“I get so much encouragement and support from our faculty and staff,” said Suttle.

She says her communication degree prepared her for her music career. “When you’re performing in all these different places, it really taught me how to connect with people in a meaningful way,” she said.

But for Suttle, being a mom to her daughter, Alice, is her most important role. As long as her family obligations are met, Suttle says she’ll continue to chase her country music dreams — all she’ll need is a spark.