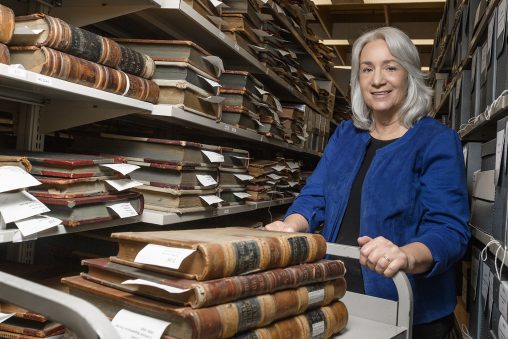 After earning two degrees and an impressive career at Wright State, Dewey retired as the head of Special Collections and Archives at the end of May.

When Dewey started working in Special Collections and Archives in 1989, the reading room was in a small space on the second floor of Dunbar Library, while archival materials were stored in different pockets and spaces on campus. The staff shared one typewriter.

Since then, the Archives moved and expanded its space to the fourth floor of Dunbar Library. Special Collections and Archives staff have enhanced their focus on collecting and providing access to historical materials with robust outreach efforts and programs for schoolchildren.

“I have met so many fascinating people, from celebrities to historians to news media people to just ordinary people who have done extraordinary things,” Dewey said.

Collections have been loaned to the Smithsonian National Air and Space Museum, the Museum of Flight in Seattle, the Royal Air Museum in Great Britain, the Zeppelin Museum in Germany and the Paris Air Show.

Special Collections and Archives is home to more than 1,000 local and regional history collections and more than 20,000 books and journals. Selected materials have been digitized and are available for researchers and learners around the world through online repositories like Wright State’s Core Scholar.

“Technology has enabled us to make our materials available across the globe and that changed the landscape so much,” Dewey said.

During her career at Wright State, Dewey helped move the Archives to its current location; oversaw the expansion of the collections; taught graduate public history classes; edited a book of Bishop Milton Wright’s diaries; and traveled with Amanda Wright Lane to see where Wilbur and Orville demonstrated their airplane in Europe.

After earning two degrees and an impressive career at Wright State, Dewey retired as the head of Special Collections and Archives at the end of May.

She first came to Wright State as a student in 1973 but left school temporarily after getting married. After her husband completed his degree, she returned to Wright State, earning a bachelor’s degree in history and anthropology and a master’s degree in archives and museum administration.

Dewey started working at Wright State in Special Collections and Archives in 1989 as an entry-level archivist. Her job initially involved reference tasks and processing collections, and as time went on, she took on more responsibilities. In 1996, she was named acting head of the Archives and was appointed to the job permanently a year later.

“I embraced it and did best I could, and I know I learned a heck of a lot along the way over the years,” she said.

Dewey also served as director of the public history graduate program, teaching classes in history, public history and archives, and local history and research, as well as Honors seminars for juniors and seniors on Dayton’s aviation heritage.

As she looks back on her career, Dewey says she is amazed at how much she was able to do with a history degree.

“I’ve been really fortunate to work in a place that allowed me so many different opportunities to grow as a leader and as a historian and as a teacher,” she said. “I couldn’t have asked for anything more.”

Dewey calls the Wright Brothers Collection the “gem” of Special Collections and Archives. The collection includes more than 4,000 original photographs, as well as thousands of documents, publications, including their personal library, albums, medals and awards, family letters, diaries and personal correspondence.

“It’s what put us on the international map,” she said. “There are lots of other collections that are larger and important and those are getting more attention as time goes on. But the Wright Brothers Collection continues to be the collection that gets the most attention.” 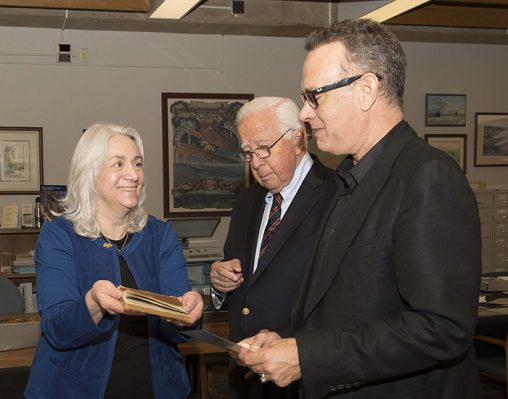 Dawne Dewey shows an item from Special Collections and Archives to Tom Hanks and Pulitzer Prize-winning author David McCullough during a special visit to the Dayton Campus.

The university also houses one of the premier aviation history archives in the country, with more than 400 collections. But Special Collections and Archives offers even more, from works by African American poet and Dayton native Paul Laurence Dunbar to the archives of the Dayton Daily News, religious history to women’s history, local government records to the records of almost every major arts organization in Dayton.

While Dewey says there are so many items in the collections that she likes, she is fond of a little autograph album in the Wright Brothers Collection that belonged to Katharine Wright when she was in grade school in 1882. One boy wrote in her book: “May your life be as you wish it, may you wish it as it is.”

She also loves family photos and personal letters like those in a collection of material from Katharine Kennedy Brown, a local woman who was active in the Republican Party. The letters are by both Brown and her future husband.

“There are so many treasures in those boxes, it’s impossible to really pick my favorite,” Dewey said.

Special Collections and Archives is collecting and preserving diaries and journals documenting the coronavirus pandemic from members of the Wright State community and local residents. The goal is to preserve stories about daily lives to provide future historians, researchers and students with information on life in the Miami Valley during the pandemic.

Dewey said that it’s important for people to preserve their thoughts and experiences.

“Just like the diaries and letters and photographs from a hundred years ago that are in the Archives, the traces we leave behind about what is happening today, what we are living through now, what we experience, what we think and feel, are important,” she said. “Every person’s life story is worth preserving and reading about. It’s all history, whether it happened a long time ago or this morning.”

Dewey said she has been reading papers, diaries and letters from 1918 about the Spanish flu epidemic. People’s experiences in 1918 are similar to what is happening during the COVID-19 crisis, she said.

“If, several decades from now, people can learn from the diaries, photographs, social media posts of what people went through now, it will help inform how we react when this happens again,” she said.

Studying local and regional history, she said, helps us understand the people who built our communities and “gives us a sense of place, a connection to the place itself and tells us why it’s important.”

A few years before Dewey’s retirement, Wright State launched Discover Your Story: The Campaign for the Wright State University Archives Center. The goal of the fundraising campaign is to transform the 2455 Presidential Drive building into a new modern home for Special Collections and Archives.

Although the campaign is on hold because of the pandemic, Dewey hopes that eventually fundraising can begin again.

“I would really like to see the Archives in a facility that matches our mission and outreach programming today,” she said. “I think it’s an amazing place and has a lot to offer and it’s a real asset to the university.”