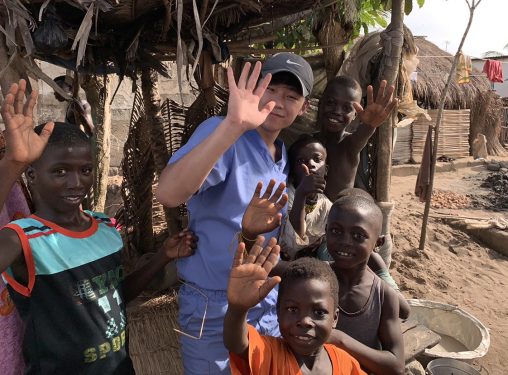 Yoon-Jae Yi, a pre-health honors student majoring in psychology and French and minoring in biology, is treasurer of Global Brigades, a student organization that helps address public health needs in countries with a lack of infrastructure.

There’s no place like home. And for Yoon-Jae Yi, that place is Wright State University.

Yi grew up in the Dayton area, the son of South Korean immigrants. His mother is a classical pianist and his father, Jung-Soo Yi, is an associate professor who has taught in Wright State’s Department of Communication for more than 20 years.

“I used to come to class with my dad when I was little and sit in the back of his lectures while he taught his students,” said Yoon-Jae.

Today, Yi is an undergraduate pre-health honors student majoring in psychology and French and minoring in biology.

He has poured his heart into college. He is a member or officer of seven student clubs and associations, been the recipient of three different academic scholarships and served as a SAT/ACT tutor. He also is a research assistant at Wright-Patterson Air Force Base and has volunteered at Soin Medical Center.

Yi arrived at Wright State in 2015 after graduating from Beavercreek High School. He had planned to attend one of the top state schools in the country and had even taken steps to do that. But he changed his mind at the last minute and came to Wright State instead.

Yi, who is scheduled to graduate next spring, said Wright State offers programs that even big state schools don’t have, such as a behavioral neuroscience concentration.

“The quality of WSU education while keeping tuition costs low are unmatched,” he said. “Also I don’t know any other school in the world that has tunnels for their students. All my friends at other schools are jealous of that.”

Yi believes Wright State’s recent hardships have made it a stronger school.

“Ever since we went through the financial difficulties that we now see many other schools facing, I feel like the Wright State community has created a tighter bond and it makes me even prouder to be a Raider,” he said.

Yi grew up in a bilingual household.

“Language has always been an important part of my life although there have been times that I have been bullied for being different because of my culture, heritage, and where I come from,” he said.

But he fully embraces how special it is to be able to speak multiple languages.

“Being fluent in English, French and Korean, being able to communicate with people in their native language offers a unique experience that a lot of people will never get the chance to do,” he said.

Yi decided to pursue medicine during his senior year of high school after his mother was diagnosed with Stage 3 breast cancer.

“The way that her physicians and surgeons saved her life, but at the same time really took the time to get to know her and my family, and showed us the compassion and care that we really needed during that time really pushed me into medicine,” he said. 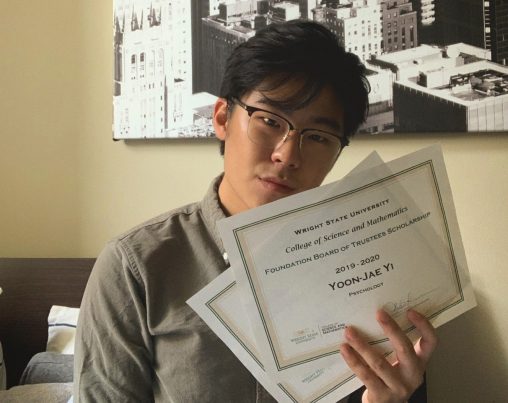 Yoon-Jae Yi is a member or officer of seven student clubs and associations, has received three different academic scholarships and served as a SAT/ACT tutor.

Yi wants to combine a career in medicine with the other things that he loves — language, community service and travel. He says being a physician would enable him to help patients through their struggles and hardships and become a guiding light for people in his community.

“Seeing how much passion my dad has for his students is why I want to be a professor as well as a physician,” he added. “My parents have both really inspired me while letting me grow into the person that I want to become as well. They are the reason why my end goal is to be a practicing physician and a professor at a medical school.”

Yi, who studied abroad in France for seven months during his second year at Wright State, serves as treasurer of Global Brigades, a Wright State student organization whose mission is to help address public health needs of communities in countries with a lack of infrastructure. Members of the group have traveled to Nicaragua and Ghana.

Yi is also helping launch the Be Hope Immigration Center, which will aid immigrants in Dayton in navigating the complex immigration system and finding paths to legal residency and citizenship.

Since 2015, Yi has worked in materials and nanotechnology at the Air Force Research Laboratory at Wright-Patterson Air Force Base. Last year, he completed his honors thesis project, titled “Do the Carotid Bodies Contribute to the Synergistic Depression of Breathing Observed During Combined Opioid and Ethanol Use?”

Yi was a member of the College of Science and Mathematics Dean’s Circle, which forms a bridge between students and the Dean’s Office. He worked closely with then-Dean Douglas Leaman, who is now interim provost; and then-Assistant Dean Jacqueline Neal.

“They personally helped me to find a voice here at Wright State and really built me up into the leader that I have become,” Yi said. “Their guidance and the amount of trust they placed in our small group of students helped us all to blossom in so many ways.”

Yi and Neal created C-SEMP (COSM-Student Engagement Mentoring Program) in which older students partner with younger students to help them navigate their way through college.

Yi’s heavy involvement in extracurricular activities makes one wonder when he finds time to play the bass guitar, a hobby of his. He co-founded the Neuroscience Club and is a member of French Club, Psychology Club, Asian Student Association and American Medical Student Association.