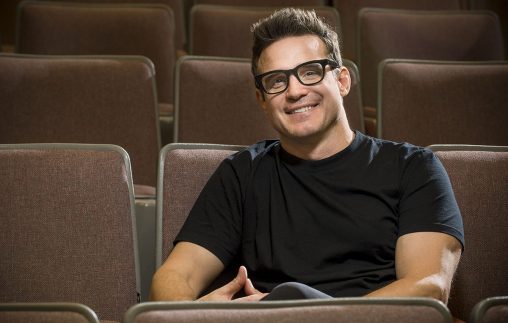 Wright State alumnus Eddie McClintock will discuss his acting career and his experiences at Wright State on Sept. 30 during Homecoming Week.

Wright State University alumnus Eddie McClintock will discuss his career as a TV actor and his experiences at Wright State during the first program in the Virtual Alumni Speaker Series.

McClintock’s talk will take place on Webex on Wednesday, Sept. 30, at 5:30 p.m. as part of Homecoming Week.

The event is free and open to alumni, students, faculty and staff, although registration is required. A Webex link will be emailed to registrants prior to the event. Register online now.

During his talk, McClintock will discuss his time at Wright State and how it shaped him and his career and answer questions from the audience.

Because of restrictions on in-person gatherings, the Wright State Alumni Association created the speaker series “to bring alumni and students together in a meaningful way to interact and learn from each other,” said Greg Scharer, executive director of alumni relations.

The Alumni Association hopes to host a different speaker every month. Participants will be able to interact with alumni who are outstanding in their field, ask questions and learn how Wright State influenced their success.

While each speaker will draw interest from those interested in their area of expertise, Scharer said, the Alumni Association asked McClintock to launch the series because of his broad appeal associated with his work on television.

“Almost everyone will have seen a show Eddie has been on and most people will recognize his face,” Scharer said.

McClintock graduated from Wright State in 1991 with a bachelor’s degree in communication studies. He was a varsity wrestler on Wright State’s nationally recognized wrestling team.

After moving to Los Angeles, McClintock developed an interest in acting, starting in commercials and working his way up to series television and feature films. He has starred in six series, worked on several television films, and made numerous recurring and guest appearances on various TV shows.

McClintock is best known for his role as Secret Service agent Pete Lattimer on “Warehouse 13,” which ran for five seasons on the Syfy Channel and became Syfy’s most successful show.

He has also starred “Shooter” with Ryan Phillipe and Omar Epps; “Stark Raving Mad” with Tony Shalhoub and Neil Patrick Harris; “A.U.S.A.” with Scott Foley; “Crumbs” with Jane Curtin and Fred Savage; and “Holding the Baby” with Jennifer Westfelt.

McClintock remains close to Wright State and in 2014 returned to the university to serve as master of ceremonies for the public launch of Rise. Shine. The Campaign for Wright State University.