IDEAS: “Trump’s only mode of public communication is ‘selling,’ not debating” 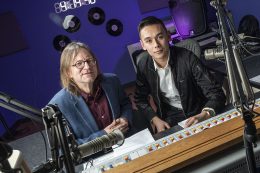 It’s difficult for a political scientist to critique the debates so far.

You don’t need to say anything more than what my mother said to me: she was revolted. But people like me are cursed with seeing beyond the obvious.

The Trump people likely went into the debate with a specific strategy. They thought that they could throw Biden off, cause him to jumble words and get confused. They’ve been pushing this thesis about diminishing mental acuity, and my guess is, they thought that quick jousting would pay television dividends.

Boy were they wrong. Biden handled the jumbled topics and interjecting barbs reasonably well. And it looked as if he was being bullied by a horrible human being.

The basic problem, as I see it, is that Trump either doesn’t know how, or simply can’t, debate. He has yet to win a presidential debate in two elections.

He was known for some of the most embarrassing shouting matches with Ted Cruz and Marco Rubio during the Republican primary in 2016. People still remember how he stood right behind Hillary with a posturing brood in the second “town hall” debate in 2016.

The problem is that Trump’s only mode of public communication is “selling,” not debating. Everything is in marketing speech: it’s going to be “really great.” “You’re going to love it.” “We’re doing a great job.” “We have some really really good people.” Everything Trump says or does is about showing you why you should have confidence in what the CEO is doing.

And because of this, he has immense difficulty handling premises and argumentation. Even when he did take turns with Biden, he could not expose in the allotted time things that any reasonable debater should have. For example, Biden’s claim that Trump is to blame for the economic collapse; that Republicans own the shutdowns; or that the corporate tax cut should be regarding not unlike Trump’s own tax loopholes. These are all easily debatable premises.

But Trump simply can’t do it when given two minutes to think on his feet.

And so he reaches for the only tools he knows of: marketing and brand. He’s the tough one and the other guy isn’t quick enough. You should have confidence in his record and greatness. Trump is hoping that as the public spectacle continues – that this marketing picture will lie subtlety in the background. You’ll think about it every time you see Biden stumble or speak less quickly. It’s all about dormant consumer perception.

Trump isn’t scared of looking like a horrible human being in a debate because he thinks that consumers will ultimately want the Tonka toy over the imitation brand.

Will it work? All that I know is that my mother is still upset.

Sean Wilson is a professor of American politics at Wright State University where he teaches the American Presidency.

View the original column at daytondailynews.com