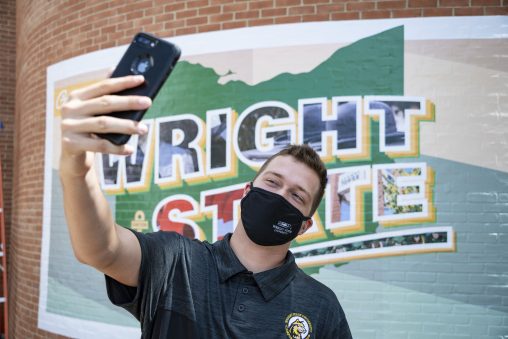 Tyler Scherer, a junior majoring in sports science with a pre-med concentration, takes a selfie in front of a new branded graphic outside the Student Union. (Photos by Erin Pence)

One of the biggest transformations is inside the Student Union, a gateway for prospective students and visitors. Colorful graphics that say “Green, Gold and Bold,” “Raider Up” and “Right Here. Right Now. Wright State” (the university’s current marketing theme) generate excitement.

“The work in the Student Union helps make the campus feel unified and develops pride in our university,” said Mark Anderson, director of marketing.

The Office of Marketing has worked closely with many groups across campus to develop standards for paint, furniture and other physical assets going forward. President Sue Edwards has been instrumental in moving these initiatives forward.

Many areas in the Student Union have been painted to bring the interior in line with university colors as well as to improve aesthetics and ambiance.

“We’ve heard many positive comments from students, as well as employees,” said Anderson.

Considerable work was completed during the summer and early fall by Wright State’s facilities and grounds crews.

“The absence of students and employees has allowed for sweeping changes that otherwise would have required more time and coordination in order to not disrupt day-to-day activities,” Anderson said.

And of course, there are more places to take Wright State selfies. 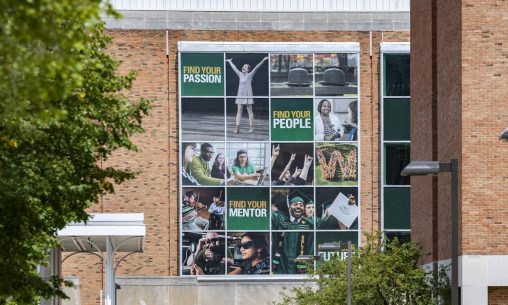 The large collage on Millett hall is visible across campus.

“When a prospective student takes a selfie at the new mural on the outside of the Student Union, for instance, it demonstrates an affinity for Wright State, increases our visibility and promotes our brand,” Anderson said.

Several murals promoting Wright State students today, as well as the legacy of the Wright brothers, were designed by Office of Marketing staff and installed in key locations around the Dayton Campus. A collage measuring more than 30-feet high depicting students and inspirational messages is visible from almost anywhere on the Quad in the center of campus.

The glass panels of the second- and third-floor conference rooms in University Hall were combined to depict a stunning two-story vintage photograph of a crowd watching the Wright brothers fly high above them.

“When the community sees Wright State’s campuses and marketing, whether they are buildings, websites, apparel or advertising, they should be instantly recognizable and cohesive,” said Anderson.

“The Office of Marketing continually works with administration, faculty, staff and students to improve the university’s branding,” he noted. “Previous efforts focused on digital assets, including websites, social media and online advertising. We are interested in continuing to bring this consistency into buildings on both campuses.”

“Seeing that teamwork and its results has been uplifting for all of us,” Anderson said.