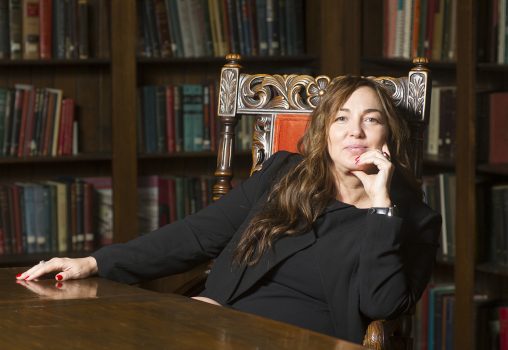 Oroszi, assistant professor, director of education and director of graduate programs in the Department of Pharmacology and Toxicology in the Boonshoft School of Medicine, will be honored by the iWoman Global Awards in September 2021.

Terry Oroszi, Ed.D., will receive the Woman Icon award for 2020, part of the third edition of the iWoman Global Awards (iWGA).

iWGA is a global nonprofit, non-governmental organization that celebrates womanhood and excellence. iWGA promotes the empowerment of women, strives to recognize women achievers worldwide, and encourages and supports all women to come together to build strong networks and support one another for the greater good.

Oroszi is an assistant professor, director of education and director of graduate programs in the Department of Pharmacology and Toxicology at the Wright State University Boonshoft School of Medicine. She is also director of the Chemical, Biological, Radiological and Nuclear (CBRN) Defense Certificate Program.

She was selected for the award based on her work combating global terrorism and contributions to education. Oroszi was unanimously selected by the award jury, comprised of representatives from six countries.

“She is a role model for millions of young girls and women around the world,” iWGA said.

Fourteen women were recognized for the 2020 iWGA Awards, including a woman who, along with being a CNN Hero of the Year, combats sex trafficking and another whose volunteer organization in Mexico has grown to 26,000 members.

“It can be difficult to believe one individual can make a difference in the world, but when you look at the award winners and the impact they have had globally, you can see it’s possible,” Oroszi said. “They are inspiring role models and I cannot wait to meet them in 2021 at the awards ceremony.”

Due to the pandemic, the 2020 winners will be recognized at the iWGA ceremony in September 2021 in New Delhi, India. The women and child development minister of India, and ambassadors from 20 nations are expected to attend the ceremony.

Oroszi started the CBRN program in 2012. She observed that medical professionals are often part of the front lines during national crises and felt a program like CBRN

was necessary at BSOM to provide medical students and health care professionals the opportunity to learn more about national and homeland security, resiliency and preparedness.

“Future physicians play a role in national security, resiliency and preparedness. We need physicians who are knowledgeable about chemical, biological, radiological and nuclear countermeasures to protect the health and well-being of the population,” said Oroszi.

Oroszi was nominated by Mangesh Manikra, the founder trustee of the Act of Random Kindness Social Welfare Society, a global, value-based nonprofit leadership program for youth. He reached out to Oroszi for assistance with leadership strategies, became familiar with her work, and thought she would be a good candidate for the award.

“When I woke up to the email saying I was one of the iWGA winners, I was totally shocked. To be honest I did not think I had a chance. I looked at the previous winners and suggested they find someone more worthy. Obviously, they saw something in me I did not, and I’m incredibly grateful,” said Oroszi.

“Now that COVID is here it is easy to see the need for our healthcare professionals to have this training,” Oroszi said. “The needs go beyond the pandemic. Telehealth, home health equipment, e-patient records, electromagnetic pulse and cyber hacking can threaten our global safety and security.”

Oroszi has spoken on American terrorism, CBRN, power, and leadership to academics, members of the military, government and many in the defense industry. Her notable speaking engagements include the National Security Agency, Quantico, and U.S. congressional staff in Washington, DC.

Oroszi has written seven books and contributed chapters to several publications. Her most recent book is the graphic novel “Operation Stormfront: From Weatherman to Wall Street.”

Oroszi received her doctoral degree in education and master’s degree and bachelor’s degree in biological sciences from Wright State.

Before attending Wright State, Oroszi served in the U.S. Army, enlisting when she was 17. She was stationed at Ft. Lewis in Washington State, followed by a tour in Wurzburg, Germany. Her military specialty was air defense artillery. While in Germany, she was part of the nuclear biological and chemical team.