Madison Stiffler began bowling at the age of 4. Her grandmother ran youth bowling leagues, her mother and father met in a bowling alley, and her brother and sister both bowled competitively through high school.

So it should come as no surprise that Stiffler, a junior at Wright State University, is a star on the women’s club bowling team.

“She’s an incredible bowler,” said teammate Jessica Pitt. “She’s such an amazing asset to this team.”

Stiffler, one of triplets, grew up in the Columbus suburb of Whitehall, where she spent a lot of time at Holiday Lanes. She would compare scores with her parents, hoping she would someday be able to best them.

“My mother told me once I reached her average and beat it, she was going to retire from bowling and she ended up retiring,” said Stiffler. 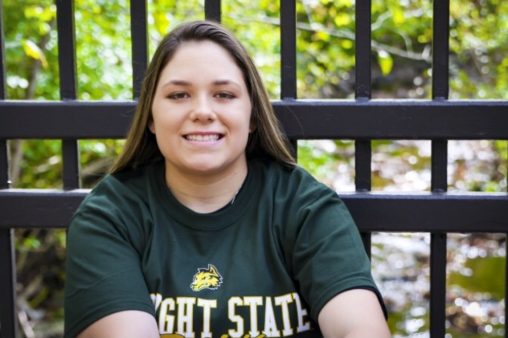 Madison Stiffler, a junior crime and justice major at Wright State, is a star on the women’s club bowling team.

Stiffler won a state bowling title her sophomore year at Whitehall High School and was on the state all-tournament team all four years. She was recruited by Wright State, whose women’s club bowling team is a perennial power.

This year the team is ranked preseason No. 3 in the nation among the club teams. The season, which normally begins in September, has been postponed until January because of COVID-19.

Stiffler said being on the bowling team has many advantages.

The Wright State players are not on scholarship. In fact, they have to pay $750 a year to bowl.

“I have a lot of fun. We go in there and even when we lose still take memories away from it,” said Stiffler. “We take the sport seriously, but at the same time we don’t treat it too much like a job.”

“She strikes a lot but even when she doesn’t strike, she keeps a level head and makes her spares. And even if she doesn’t, she doesn’t get upset about it,” said Pitt. “She’s super focused when she bowls. She’s super driven, not only in bowling but also in school.” 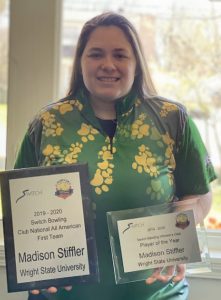 Inspired by law enforcement professionals, Stiffler majors in crime and justice studies and minors in psychology. She hopes to work for the Drug Enforcement Administration following graduation, saying she knows people who have been adversely impacted by the opioid crisis.

“I want to help them by getting those drugs off the streets,” she said. “These drugs are killing people, and I want to get a chance to change that.”

Pitt said that when the bowlers occasionally get down, Stiffler is there to lift their spirits, once pulling out a whole list of jokes.

“She’s the heart of this team,” said Pitt. “She’s always cheering everybody on and encouraging everybody.”