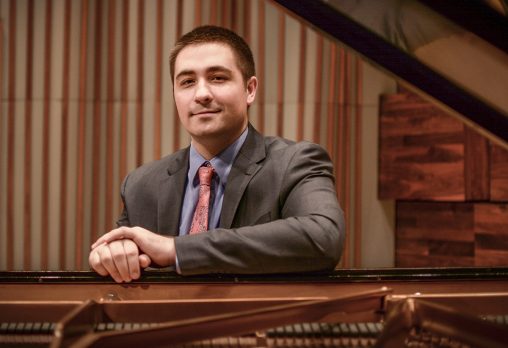 Jackson Riffle, who majors in music performance with concentrations in piano and percussion, has performed with symphonies and at music festivals, composed music and won numerous awards.

Reading through all of his musical accomplishments and experiences out loud can leave one gasping for air.

Wright State University senior Jackson Riffle, an accomplished pianist and percussionist, has appeared with symphonies as a soloist, composed music for orchestras and bands, directed ensembles, attended prestigious national music festivals with well-known professional musicians and won a bundle of awards along the way.

“Making the monumental decision to pursue a career in music prompted me to study the subject in a diligent manner, always striving to enhance my skills and become the best musician I can be,” said Riffle, who majors in music performance with concentrations in piano and percussion, practices eight to 10 hours a day and carries a 4.0 grade point average.

Riffle grew up in the western Ohio village of Pleasant Hill, where his mother was an elementary school music teacher for more than 20 years. He began taking piano lessons when he was 6.

“Despite typical 6-year-old bickering, I began to enjoy and excel in the activity, realizing that music would be a lifelong necessity,” he said.

Riffle’s enjoyment of music intensified in junior high school, when he came into contact with other musicians.

“The introduction of other musicians also inspired me to be relentless in developing my abilities, resulting in a massive musical improvement during this phase of my life,” he said. “From this point forward, it was undeniable that music would forever be an element of my identity and, ideally, the pathway of my career.”

In fifth grade, Riffle began playing percussion and later performed in his high school marching band’s drumline. In the concert band, he played the trumpet, trombone and euphonium.

Riffle came to Wright State after graduating from Newton High School in 2017 as valedictorian of his class, attracted by the university’s close proximity, the prestigious programs offered by the School of Music, affordability and resources.

“Both the piano and percussion programs at Wright State have been extremely successful, and members of the studios have performed, competed and become well-known at a state and national level,” he said. “The instructors for these concentrations are also prestigious, knowledgeable and connected in their respective fields.”

“It’s hard enough to be excellent on piano or percussion alone, but Jackson’s drive, attention to detail, work ethic, and his constant desire for excellence make him outstanding on both instruments,” said Noble.

Riffle was also drawn to Wright State by its proximity to numerous professional orchestras, which enabled him to get extra instruction from their members. He said percussion studies in an orchestral audition preparation setting involve tedious and extremely detail-oriented practice sessions.

“Precision and consistency are monumentally essential when preparing for an orchestral audition,” he said. “But playing in an orchestral section at a concert is extremely rewarding. Contributing to the ensemble in essential ways gives me a sense of validation for all of the tedious work and time I have dedicated in the practice room.”

As a soloist, Riffle said playing percussion and piano allows him to freely convey his artistry and interpretation, enabling him to expressively portray the music to the listener.

“I wouldn’t say I like one instrument more than the other, but my favorite performances have definitely been soloing with an ensemble; whether it was been a xylophone solo with wind symphony, a piano or marimba concerto with an orchestra, or a percussion solo with chamber ensemble accompaniment,” he said.

“A work I compose for a multi-percussion trio is loud and energetic, while a work for orchestra may be mellow and reflective,” he said. “Sometimes I use pieces to tell a story or depict a certain character throughout. Other types of pieces may showcase and allow for much creativity such as a theme and variations.”

In the summer of 2018, Riffle attended the Brevard Music Festival in North Carolina, studying with and performing alongside members of the Cincinnati Symphony, Rochester Philharmonic and Eastman faculty.

“Brevard was special for me as it was one of the first times performing alongside professional musicians,” he said. “I was able to play under the direction of some of the world’s most well-known conductors, including Keith Lockhart, Joann Falletta, Matthias Bamert and Ken Lam.”

Last summer, Riffle received a fellowship to attend the National Orchestral Institute and Festival, where he participated in master classes with Eric Shin, Jauvon Gilliam and John Tafoya.

At Wright State, Riffle received the Robert and Wanda Stofer Award, the Ralph and Marilyn Smith Award, the Charles R. Spinney Music Composition Award, the Irene Romanowski Piano Award and the Linda Pemberton Toomey Piano Performance Scholarship-2017. He was also the Concerto Competition Winner for percussion in 2018 and for piano in 2019 and 2021.

He has appeared as a soloist with the Dayton Philharmonic, Kettering Civic Band, Greenville Municipal Band and Sinclair Community College Wind Symphony. He has performed with the Springfield Symphony, the Richmond Symphony, the Carmel Symphony and the Dayton Bach Society/Oakwood Brass. He also appeared on Dayton Public Radio as a guest artist, performed as a finalist for the “President’s Own” Marine Band’s Concerto Competition and won the Adult Duet/Duo division of the 2019 Ohio MTA/Graves Piano Competition.

Riffle has also performed for Wright State master classes instructed by prestigious musicians such as Robert Van Sice of Yale University, Michael Burritt of the Eastman School of Music, Svetoslav Stoyanov of the Frost School of Music, Matt Keown of the Peabody Conservatory Faculty, Richard Jensen of the Cincinnati Symphony Orchestra, Paul Fadoul of the Gettysburg College Faculty and Michael Chertok of the Cincinnati Conservatory of Music.

“Jackson Riffle is one of those unique people who doesn’t rest on talent or his latest success,” said Noble. “He continues to find unique and creative ways to improve daily and he is relentless about that.”

Riffle has guest directed several ensembles and served as a music clinician for schools around the state. He is the music arranger for the Grove City High School Marching Band, helping to design the fall show and arrange the wind parts.

“While I have seen success in multiple areas of the industry, my biggest aspiration is to become an orchestral percussionist in a full-time orchestra,” he said.