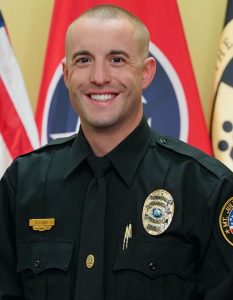 Sam Lewis, who earned his bachelor’s degree in nursing at Wright State, is now a police officer in Tennessee.

Nursing has been a driving force in the life of Sam Lewis. The Wright State University alumnus used his nursing skills in the U.S. Army, in Afghanistan, in the heart transplant unit at Vanderbilt University Medical Center and in hospice.

And although Lewis recently made a career change by joining a police force in suburban Nashville, he hopes to eventually use those skills as a medic with the department’s version of SWAT.

Lewis graduated from the police academy in December, serving as a team leader and received top honors in the form of an academic award. He works as a patrol officer with the Mt. Juliet Police Department and has aspirations to be a detective and a SWAT medic.

Lewis said he was attracted to law enforcement because he has always wanted to serve others and his community and missed the brotherhood of something bigger than himself.

“I’ve also always been the type of person that when I see a problem, I want to be part of the solution,” he said. “And with the current state of affairs between the public and the police, my belief is that I can have a positive impact on my community and the perception of law enforcement.”

Lewis grew up in Enon, graduating from Greenon High School in 2003. His interest in medicine stemmed from a deeply personal experience.

“My sister had brain tumors when she was 5 years old and was supposed to die from this,” he said. “Dr. Edward Kosnik Jr. at Nationwide Children’s Hospital in Columbus was the only one who gave my parents any hope that my sister might live to see her 6th birthday. Thanks to him and his supportive staff, she turned 37 this year. Ever since, I’ve been interested in medicine and helping others.”

Lewis said he was attracted to Wright State because of the great reputation of its College of Nursing and Health and Boonshoft School of Medicine as well as its close location and affordability. He said the course loads were manageable and the schedule flexibility of course times allowed him to work while attending school.

“I had great professors who challenged me academically and inspired me to strive harder to do my best,” he said. “Most of them were available for consultation if needed and would assist the student in finding tutors or someone else that could help if there was a course they were struggling in. Wright State offered me an array of opportunities to hone my leadership capabilities and balance work, school, life, play.”

Lewis said he had “a blast” at Wright State, participating in intramural soccer and rugby and helping out the Office of Disability Services with basketball and other activities.

After graduating from Wright State in 2008 with a bachelor’s degree in nursing, Lewis joined the Army as a second lieutenant, serving on active duty from 2009 to 2014.

In the Army, Lewis worked as a charge nurse in hematology/oncology and then in emergency medicine, when he was deployed to Afghanistan. Upon his return, he was the officer in charge of an outpatient clinic and a vaccine clinic, and he was a brigade nurse responsible for the medical readiness of about 3,500 soldiers. He also served as rear detachment commander.

After his stint in the Army, Lewis moved to Nashville and worked in the heart transplant unit at Vanderbilt University Medical Center for 2.5 years. He later worked in hospice and most recently was part of the COVID-19 response team for the Mid-Cumberland Region in Tennessee as the team leader for the nurse strike force.