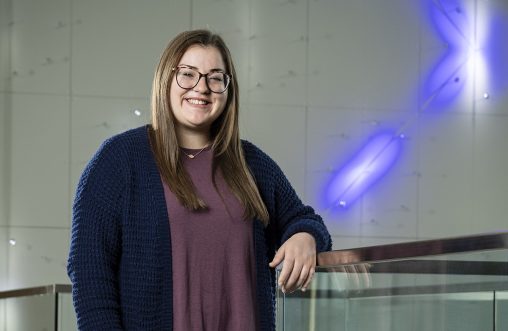 When senior Carmen Asman ’21 began her college career at Wright State, she was convinced she wanted to study biological sciences. But after a few courses, she realized how much more interested she was in her physics and calculus classes. She soon found herself searching for a way to use aspects of biology while focusing on her physics and calculus work—and eventually found that switching her major to biomedical engineering was a perfect fit.

“It combines everything I am passionate about,” Asman said. “After switching majors, I never looked back.”

Since the switch, Asman’s passion for engineering also began to amplify. She is the president of the Wright State chapter of the Biomedical Engineering Society, which focuses on community outreach, networking within industry, volunteering, fundraising, and mentoring. She also serves as committee chair for the Wright State chapter of Tau Beta Pi, the National Engineering Honor Society. Asman said she enjoys getting to know engineers in other disciplines and watching them succeed in their field.

Asman also plays club soccer, is a member of Cru (a college ministry student organization), and works at Wright-Patterson Air Force Base (WPAFB).

She completed an internship with the Oak Ridge Institute for Science and Education Goodwill. Asman and 25 other students worked with mentors based on their academic backgrounds, ranging from communication to exercise science and biology to computer science. Her mentor during the internship, Andy McKinley, Ph.D., asked her to be a part of his team at WPAFB.

“Dr. McKinley is the leader of the Non-Invasive Brain Stimulation (NIBS) team,” Asman said. “He runs and oversees various studies using non-invasive brain stimulation methods, something I had never heard of. He and his team have taught me so much in a very short amount of time.”

Before the program took a hiatus due to COVID-19 restrictions, Asman would run studies and collect data, sometimes multiple studies and data sets at the same time. With McKinley, she would compile research papers and create input data for new studies. Her main study involved magnetic resonance imaging (MRI), which focuses on brain imaging

“I am constantly learning in this position and the NIBS team is undoubtedly the best team I have ever worked with,” she said.

This job could not have been possible without Wright State, she said, one of the many reasons why Wright State was her top choice. Her parents are both Wright State alumni and met here on campus.

“My family has always meant the world to me,” she said. “I wouldn’t be where I am without their support.”