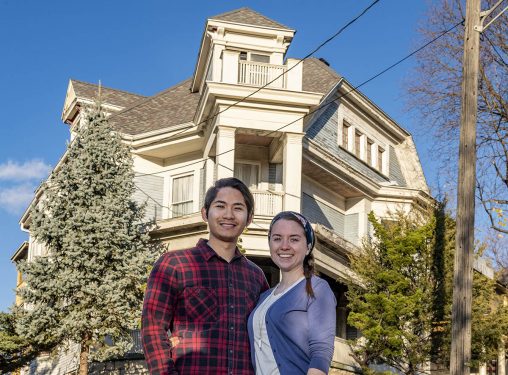 Martha Conkel Nghiem ’16 and her husband, Tung Ngheim, in front of their “Minnie.”

When Martha Conkel Nghiem and Tung Nghiem began thinking about where they wanted to begin their married life, Dayton’s charming and historic St. Anne’s Hill neighborhood was at the top of their list.

“I’ve always loved this neighborhood, and the houses are so beautiful,” said Martha, a 2016 Wright State graduate.

When the big, blue Victorian home, lovingly known locally as the Wilhelmina, perched on a hill on McLain Street went on the market in January 2020, it was a no-brainer for Martha and Tung to put in a bid. But they had to act fast, and they faced some stiff competition.

A flurry of offers poured in for the St. Anne’s Hill landmark overlooking Bomberger Park and the downtown Dayton skyline. With the hilltop home easily seen from nearby and heavily traveled South Keowee Street, the property had developed an almost iconic reputation over the years. Its sale attracted the attention of the Dayton Daily News and the home was featured on the popular For The Love of Old Houses Facebook page, which has over three million followers.

Martha saw the property listing on a Friday. Offers had to be submitted by Monday and the new owner of the home would be announced Tuesday. To further complicate matters, Tung was in California at graduate school, and there were stipulations that the house had to be purchased as-is with no inspections.

“I put in the offer, and I just figured there was no way that we were going to get this house. I didn’t even try to go see it,” Martha recalled. “When they announced that we got it, we were really surprised and thought we should go see it right away.”

Preparing themselves for the worst, Martha and Tung were pleasantly surprised by what they found.

“There were no major problems. No bad roof or foundation,” said Tung.

While the couple was thrilled to land their dream home, they both admit it was a little overwhelming to see the house for the first time and begin thinking about everything they would need to do. Though they lacked any previous experience in home renovations, they quickly saw the home’s potential and were mentally prepared for the work involved.

“When we showed family members the house, they were more stressed than we were,” said Tung, who left his home country of Vietnam to study in the United States. He met Martha while he was an undergraduate at Cedarville University and Martha was studying Spanish at Wright State. 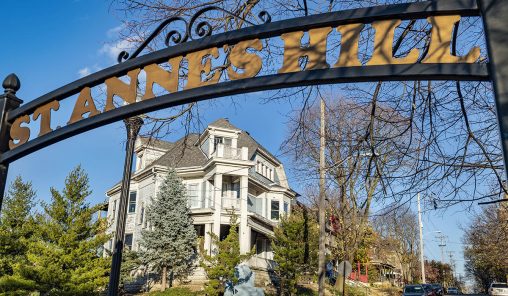 View of the Wilhelmina from the St. Anne’s Hill archway.

Built in 1899 as a single-family home, the house was later divided into four apartments.

“It took us a while to figure out what was original,” said Martha. “We could see where they had added walls, bathrooms, and kitchens.”

The Nghiems plan to restore 2,700 square feet on the home’s first and second floors to their former glory. When the renovations are complete, the residence will consist of four to five bedrooms, three bathrooms, a kitchen with a walk-in pantry, and a living room, dining room, and front foyer room. The home also has a full basement and a large attic the couple will finish.

While working on their home as quickly as they can, they anticipate it will be another year or two before all renovations are complete.

With most of the house already gutted, the Nghiems did not have to do an excessive amount of demolition. While they have relied on the experts for bigger projects like plumbing, electric, and HVAC, they are trying to do most of the work themselves.

They have been busy replacing or restoring around 30 windows, and family and friends are helping them with the drywall and flooring. The back porch was settling and needed to be raised six to seven inches. Fixing the sagging front porch is one of their next big projects, along with renovating the kitchen and one of the bathrooms.

Aside from a family of squirrels living in their siding, the couple hasn’t encountered too many unexpected surprises or buyer’s remorse. After completing one bedroom and the laundry room, they were able to move in shortly after their September 2020 nuptials.

While many couples would shy away from planning a wedding and restoring a historic home, the COVID-19 pandemic gave Martha and Tung more time to focus on both life-changing endeavors.

“We would work on the house in the mornings and spend afternoons and evenings planning our wedding,” said Tung.

Tung, who has been working on a master’s degree from California State, Fullerton, was able to return to Dayton when the pandemic started and take courses online. Martha’s schedule as a Spanish interpreter for Vocalink Global provides some flexibility as she assists area hospitals and clinics with their interpreting needs. 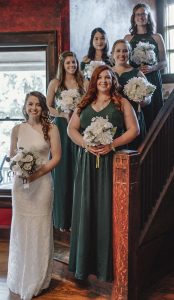 Martha and her bridesmaids decided to recreate a wedding photo they’d been sent from a woman whose aunt was married in the home in 1946.

While the Nghiems have not been able to enjoy the St. Anne’s Hill neighborhood as much as they had hoped due to COVID-19, they still feel like they’re part of the community. Neighbors walk by and introduce themselves, show them what they’ve done in their own homes, and pass along ideas or advice.

“Even with the pandemic, people have offered to lend us tools,” said Tung. “They’ve been very helpful with the house and welcoming us here.”

Throughout the restoration, the Nghiems have been documenting their progress on Instagram. Nearly 31,000 followers are seeing “The Minnie Project” unfold through photos and videos posted on the account.

The couple came up with the moniker after looking at popular baby names from 1899, the year the house was built. One of those names was Minnie. 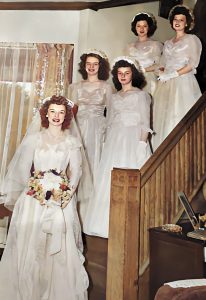 The original wedding photo from 1946, with bride Coleen Murphy (left).

“The Minnie project has a nice ring to it,” said Martha. “Since it’s such a big house, it’s fun to call it Minnie.”

Minnie also fits as a nickname for Wilhelmina, a German name that pays homage to the rich history of immigrants in the St. Anne’s Hill neighborhood.

Through their Instagram page, the Nghiems have been able to gather a treasure trove of information about their home’s history and its former occupants.

A previous owner shed light about the home’s original layout. Other followers sent photos of their relatives who lived in the home decades ago. One person told the newlyweds that their home’s four apartments had previously housed World War II soldiers.

A woman who lived in the house as a little girl shared with Martha and Tung that they are not the only ones residing in the 122-year-old home. The woman’s mother put latches on the doors, because they would open by themselves. And several of her possessions would vanish.

A ghost story was just the tip of the iceberg. Martha and Tung also learned that the home’s original owner hid gold in a closet under the stairs. When new owners discovered the secret stash years later, they sold the house and bought a plantation in the South.

“People are so supportive,” said Martha. “We’re just glad that so many people love the house as much as we do, and they’re excited to follow along.”

The Ngheims were especially touched when one woman provided photos of her aunt’s wedding at the home in 1946. One picture featured the bride, Coleen Murphy, as her sister and matron of honor, Gloria, adjusted her veil. Martha recreated that same photo on her wedding day, 74 years later, with her own sister.

Rather than completely modernizing the house, the couple wants it to look appropriate for the time period in which it was built. They have been utilizing Facebook Marketplace to buy antique pieces. A stove from the 1920s and a Hoosier cabinet are some recent finds.

“We’re trying to have all of the conveniences we want while preserving that old Victorian look,” Martha explained. 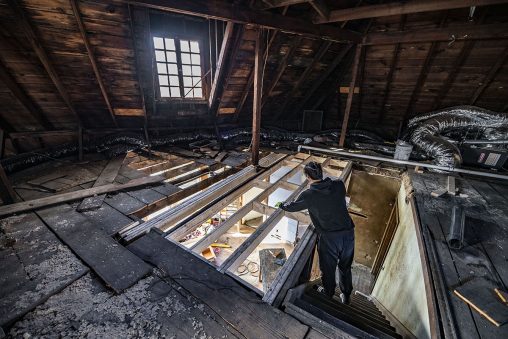 She is passionate about the home’s architecture and its ideal location in the St. Anne’s Hill Historic District.

“The people are so friendly here,” she said. “It’s beautiful to just walk around the neighborhood and drive through it every day.”

This spring, the couple plans to continue their labor of love as they transform their historic fixer upper into the home of their dreams.

Join Martha and Tung on their home restoration journey by following the.minnie.project on Instagram.