DBJ: President Sue Edwards on how Wright State is positioning itself for the future 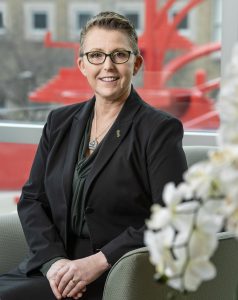 In many regards, 2020 was a year filled with milestones for Wright State University. The university secured millions in federal research dollars, scored high marks in national rankings and began developing its first new college in more than 30 years.

Still, the last several years have been tumultuous for the Fairborn-based school. A budget crisis, declining enrollment and pending faculty cuts have put the university in a tough position: To ensure long-term viability, Wright State needs to rightsize.

There likely isn’t a one-step solution to balance the budget and reverse enrollment trends, but there are key strategies Wright State is implementing to build a sustainable foundation. More than 80% of its graduates live and work in the Dayton region, and president Sue Edwards wants that number to grow.

That means developing programming and forging partnerships that align with local employers’ needs, Edwards told me. Here’s what it looks like:

If there’s one thing the pandemic brought to the forefront, Edwards said, it’s the importance of Dayton’s healthcare system.

The demand isn’t exclusive to clinical jobs, Edwards said. Support staff are vital to the Miami Valley’s healthcare infrastructure, and that’s where Wright State is honing its workforce development efforts.

“It ranges from IT specialists to HR,” she said. “It’s social workers, counselors, psychologists, psychiatrists. There’s a whole gamut of folks that really are critical to the needs of the region.”

But as Wright State seeks to diversify its healthcare footprint, it’s looking beyond the “big three” networks, Edwards said. Public health, nonprofits and organizations like the Artemis Center and Dayton Children’s Hospital are key to the equation.

“We really have to listen to what their needs are, and it’s not just about their needs for right now,” she said. “Our students are graduating in four-year cycles. So, what are their needs five years from now, and how can we modify on our programming in order to meet the needs of the region?”

That’s a driving force behind Wright State’s new health college. Slated to launch this fall, the college will support development of new educational programs, research areas and partnerships, and it will integrate advising and retention strategies to create more pathways to student success.

“We’re really focused on how to provide experiential learning opportunities for our students that fit in with the needs of the region,” Edwards said. “And I think we have to focus broadly, because that’s where the needs are.”

Tapping into the base

In 2019, Wright State invested more than $64 million in research and development. More than half of those dollars went toward engineering, and nearly all of it involved some degree of collaboration with Wright-Patterson Air Force Base.

Now, the university is looking to broaden the scope of its research at the base — and that means tapping into fields that were previously overlooked.

“We have actually expanded our research profile with the base,” Edwards said. “We’ve been very connected with the base on the engineering and computer sides of the house, and we’ve now expanded that into medical research.”

Some strategies to funnel talent are traditional, like expanding internships and co-op experiences.

Others are more creative, like a cooperative R&D agreement that enables AFRL personnel to access lab space at the Boonshoft School of Medicine — which in turn provides professional development experiences for students and enhances opportunities for additional funding.

“Whether it’s the LCMC, the 88th, the 711th, AFRL or NASIC, they all have different needs,” Edwards said. “And in order for the base to remain strong in the region, we are doing exactly the same thing we’re doing with our other partners in the community and listening to what their needs are.”