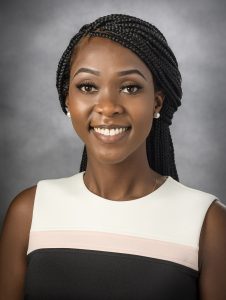 Elisabeth Adkins is a dual M.D./MBA student at the Boonshoft School of Medicine.

Elisabeth Adkins talked about being a doctor since she was 2 years old.

“Medical school is a dream that wouldn’t let go of me,” Adkins said.

Adkins decided to go to the Caribbean Island of Grenada to pursue her dream. Her family threw a huge going-away party. The day before she was going to fly from her home in Jacksonville, Florida, her mother’s prayers were answered with a phone call.

Adkins had been accepted into the Boonshoft School of Medicine at Wright State University after months of being on its waiting list.

Now, she represents the medical school on the Student National Medical Association (SNMA) board of directors as the national community service committee co-chairperson. “Boonshoft has a legacy of leadership in SNMA with previous presidents and board members,” according to Dr. Gary LeRoy, associate dean for Student Affairs and Admissions.

Community service defines Adkins thanks to the fierce love of her mother, Estella Braxton. Adkins learned three lessons from her mom:

Her mother retired after a 28-year education administrative career, then use

d half of her state retirement money to start an early learning center. She wasn’t satisfied with local children entering kindergarten without knowing their ABCs. The nonprofit center’s student population has 90% low socio-economic status. By the time the students enter kindergarten, most of them exceed school standards and 20% of her students test as gifted.

Braxton appointed Adkins as president of her nonprofit and taught her how to run it. As a 14-year-old, Adkins described the education as torture. This summer, she appreciated the lessons as she effortlessly ran the center while her mother recovered from surgery.

Adkins said she is “not waiting for an M.D. behind her name to evoke positive change.”

She started a tutoring project with Trotwood’s Early Learning Center while Community Service chair at Boonshoft’s SNMA chapter. Medical students can complete one of their mandatory service requirements after 20 hours of tutoring. When Adkins learned 70% of the school’s students had no more than one book at home, she collected over 1,400 book donations. She wants children to know physicians are approachable people by interacting with them at a young age.

Adkins was reluctant to run for SNMA’s national board, but now thinks it is the greatest decision she made in regards to community service. She is learning how a national organization can create effective change on a larger scale.

SNMA is the nation’s oldest and largest independent, student-run organization focused on the needs and concerns of students of color. It is committed to supporting underrepresented minority medical students, addressing the needs of underserved communities, and increasing the number of clinically excellent, culturally competent and socially conscious physicians.

The students at Boonshoft have “their foot squarely on the accelerator of service,” LeRoy says.

Adkins is pursuing an M.D./MBA dual degree through the school’s Physician Leadership Development Program. LeRoy says these graduates often go on to manage the health of a population as community health directors or hospital administrators.

Adkins hopes to use her degree to assist in the elimination of racial and ethnic health disparities. She will graduate in 2023 with plans to specialize in obstetrics and gynecology.

She wants other students to know “medical school is not impossible. The strength of the less brilliant is perseverance.”