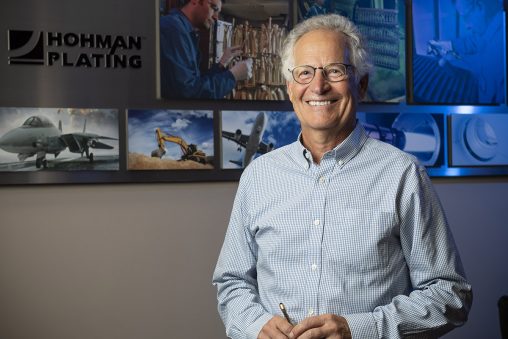 Inspiring the next generation of engineers has inspired Wright State graduate Bill Miller to including the College of Engineering and Computer Science in his estate.

Bill Miller knows that getting through college can be a struggle for many students. As a young man growing up in Brookville, he recognized that a state university would be his only affordable option for college.

After one year at Bowling Green State University, Miller had used all his hard-earned savings. He decided to return home and commute to Wright State University to finish his degree.

As he carpooled to campus with his best friend from high school and began attending engineering classes, Miller quickly realized that most of his Wright State classmates were working part-time jobs and paying their own way through school. Just like him, all of the students were there to learn, not party.

Miller did have a distinct advantage over his classmates. He worked at Dayton-based Hohman Plating, where he could get valuable real-world experience and could see the engineering principles that he was studying put into action.

“I felt I had a heads-up on everybody else,” said Miller. “I could apply what I was learning right away.”

After graduating from Wright State in 1975 with a degree in systems engineering, Miller was hired on full time at Hohman Plating as a process engineer. Since then, he has held almost every position within the company including facilities manager, quality manager, general manager, vice president, president, and now CEO and the self-proclaimed chief engineering officer.

Over the years, Miller purchased stock until he was the majority owner of Hohman Plating. Six years ago, he hired a president to run the company, so he could focus on what he loves most — strategy, coaching and engineering.

Five decades after he first joined Hohman Plating, Miller still thrives on the company’s high-energy environment, where every day is different and there is a never-ending supply of challenges in need of creative solutions.

“There is high variability of work. After co-oping, I knew I needed that variety. At Hohman Plating, you’ve always got five balls in the air,” he said. “Every day, we get a part that has some degree of difficulty for us to design a process. Working through that and figuring out how to do difficult parts excites and inspires me. Some of the parts that we do — we’re the only people in the world that plate them.”

Working with parts that are challenging to coat is Hohman’s specialty. The company’s 180 employees utilize around 200 unique processes to plate parts of varying shapes, configurations and base metals. Hohman serves more than 1,000 customers in a variety of industries, including the military and aerospace.

Many of the parts Hohman plates are utilized in the mechanics, hydraulics systems, jet engines, pneumatics, and control systems of aircrafts. The company also works with NASA. Hohman’s coatings can be found on parts as far away as the moon and Mars, where they grace rocket engines, satellites, the space station and Mars Rovers.

Miller is enthusiastic about sharing his passion for engineering with today’s college students. Hohman Plating’s co-op program provides valuable, hands-on experience to engineering majors from Wright State and other universities.

“I want to help students get the same opportunities I had,” said Miller.

So far, the co-op program has been a win-win for both the students and Hohman Plating.

“They’re good for the business, and we get positive feedback from the co-ops,” said Miller. “Most of them say ‘This is the best place I’ve ever co-opted, because I was doing something meaningful and could see immediate results.’ They just love their experience here.”

Inspiring the next generation of engineers has also influenced Miller’s philanthropy. For years, he has been making annual gifts to Wright State’s College of Engineering and Computer Science. He recently elevated his commitment by including the college in his estate.

Miller’s planned gift will make an even greater impact, since the Wright State University Foundation is currently offering a 10% match on the face value of estate gifts, up to a maximum of $10,000. Donors may designate the foundation’s match to a current-use Wright State fund of their choosing.

Miller is applying the foundation’s match to the senior design capstone project for industrial and systems engineering (ISE) majors in the Department of Biomedical, Industrial and Human Factors Engineering.

About 20-30 ISE students participate in the capstone project during a typical year, where they apply all of the skills that they have learned in the classroom to solve real-world problems proposed by local industry partners, said Subhashini Ganapathy, associate professor and chair of the Department of Biomedical, Industrial and Human Factors Engineering.

“We are grateful that Hohman Plating chose to support the ISE capstone design project with the foundation’s match,” said Ganapathy. “The match will help provide materials and supplies so students don’t have to just work on simulation. They can do some real implementation.”

For Miller, forging a corporate partnership between Hohman Plating and Wright State is another outlet for encouraging students to discover their passions.

“I’d like to have some of Wright State’s students get as excited as I am about engineering and how they fit into that world,” he said. “Helping people identify their talents and being able to use their talents within engineering is energizing me.”