It all began with a monkey stuffed animal given to her 3-year-old twin brother by middle schoolers when he was in the hospital.

The joy the animal generated led Callista Hess, a marketing major at Wright State University, and her family to create an organization that helps make and deliver several thousand personalized teddy bears to sick children.

Now in its 14th year, Bears4Children’s has put more than 2,700 Build-a-Bear teddy bears in the arms of patients at Dayton Children’s Hospital. In 2020 alone, the organization distributed 629 bears to children in the hospital. Its goal this year is 650 bears.

“It is a lot of work at times, but it is definitely all worth it. It’s very rewarding,” said Hess. “My favorite part is afterwards seeing parents post pictures of their kids in the hospital with the bears because it really does make a difference even though it’s just a very small act of kindness.”

Bears4Children’s teams up with Build-A-Bear Workshop. Many of the bears are purchased by sponsors and built by volunteers at the local Build-A-Bear store. The bears are then packed up and delivered to the hospital.

Up until Dec. 22, people can go to Build-a-Bear at The Mall at Fairfield Commons anytime during store hours and purchase and stuff their bear(s) and leave them there for Hess to pick up. Two event days are planned in which the community can purchase, stuff and make donations together: Dec. 20 from 4 to 8 p.m. and Dec. 23 from 8 to 11 a.m.

“What they’re doing really fits in with our mission statement, which is add a little more heart to life,” said Brian Reigelsperger, chief workshop manager at Build-A-Bear. “We’re thrilled to be partners with Bears4Children’s.” 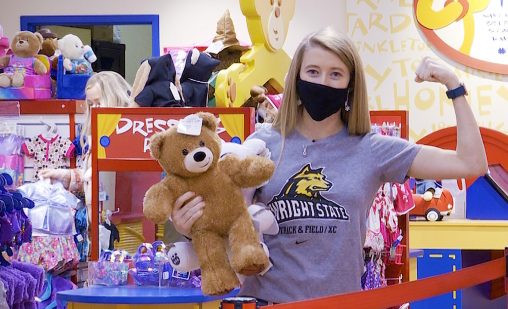 The idea of Bears4Children’s was planted following Hess’ brother Tayton’s hospital stay, during which time he was given the stuffed animal. A few years later, Hess, her mother and brothers got some cousins together and built 12 bears. And then it just kept growing.

“When patients receive these Build-a-Bears, it’s not just something someone ordered on Amazon and bought in bulk and sent to the hospital,” said Hess. “This is what other people are taking their time to stuff and put some love into to give it to a complete stranger that’s just got the extra stress of being in the hospital over the holidays.”

Tayton said Bears4Children’s has shown him that even the smallest acts can make a big impact on people.

“From participating, not only do the recipients feel better, but I myself feel better knowing that I helped to make a difference,” said Tayton, a Wright State biological sciences major and member of the cross country team and Sigma Phi Epsilon fraternity.

Callista is also on the track and field team and a member of the Kappa Delta sorority.

“There is a lot of positivity there and people are very inclusive at Wright State,” she said.

Hess likes the business world and the many options marketing offers. She sees a possible career in health care administration. 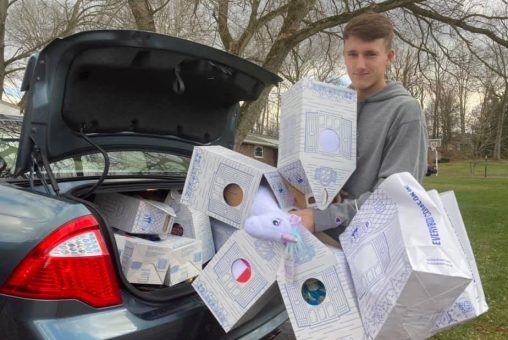 Tayton Hess, a biological sciences major at Wright State, said Bears4Children’s has shown him that the smallest acts can make a big impact on others.

Callista said Bears4Children’s is a great opportunity for younger children to make an impact on the community.

“They spend all this time picking out a bear, stuffing it, dressing it, just to leave it here to be given to a stranger. That’s really difficult for some kids sometimes,” she said. “For many kids, this is their first time learning how to give back, and I think it’s an awesome step.”