WWSU 106.9 FM, Wright State University’s student-operated radio station, won a coveted 2021 Spirit of College Radio Award, an honor bestowed on only 10 of over 600 participating stations from around the world.

The award stemmed from World College Radio Day, an annual international event held by the College Radio Foundation, a registered public charity that supports the operations of college radio stations.

The participating stations broadcasted special events, interviews, band performances and other programming. This year’s theme was designed to showcase the resilience of college radio amidst the COVID-19 pandemic.

“Every day is a day to celebrate college radio, but these stations took it to the next level,” said Rob Quicke, founder of College Radio Day. “These stations are to be congratulated for doing brilliant work in the most challenging of circumstances.”

“With this award, it’s one of those hard-work-pays-off moments,” said Shea Neal, general manager of WWSU.

“Absolutely huge,” added Parker Testa, WWSU sports director. “To see all the people on campus rally around us when the news came out that we won the award was really special for us.”

WWSU had originally planned to host a 24-hour radiothon on World College Radio Day by providing non-stop radio programming and no automation for 24 hours.

However, an electrical fire in August prevented access to the station at its home in the Student Union for three weeks, leaving WWSU only about a week to plan the radiothon. So the station decided to instead aim for a 17-hour marathon.

“We knew it was a tall task,” said Neal. “The biggest challenge was the short deadline that we had.” 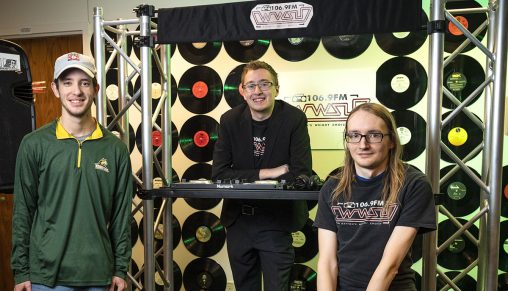 The WWSU radiothon began on Friday, Oct. 1, at 8 a.m. and finished at 1 a.m. on Saturday, Oct. 2. The shows were broadcast live at the station or recorded in advance, without any automation music.

“It shows that we as a radio station are on the right track, bringing some awesome content and services to the Wright State community,” Patrick Schmalstig, chief engineer at WWSU, said of the award.

The 17 hours of non-stop programming included an interview with Debbie Lamp, associate director of student involvement and leadership and the station’s staff advisor, about her college radio days and what led her to her present role; and interviews with Chris Taylor, Ph.D., dean of students, and Jonathan Ciero, student body president, on the importance of college radio to the Wright State community.

WWSU was founded in 1977 and operated out of Dunbar Library. In 2007, the station moved to the Student Union.

The station has more than 30 member/workers, six of whom are paid employees. The student workers include directors, disc jockeys, show hosts and those who work on social media and video for the station’s YouTube channel.

Programming includes sports broadcasts, talk shows and a wide variety of music, which is the backbone of the station. The station broadcasts 24 hours a day, seven days a week.

Neal said many WWSU staffers have a similar back story.

“They came to campus commuting, didn’t have a ton of friends, (were) looking for that little niche to get involved in on campus, and now we leave feeling like we have a second family away from home,” he said.

Schmalstig, who along with a friend ran an internet radio station as a hobby when he was young, joined WWSU in 2012 as a disc jockey. He said he was attracted to Wright State primarily because of the opportunity to work at WWSU, which gives students a voice and way to express themselves.

“One of the things I like the most about this place in terms of WWSU is how much freedom you have,” he said. “I do experimenting a lot here. You can tinker around with the software and the equipment and make it do cool new things.”

Testa is the station’s lead broadcaster, covering Wright State basketball, baseball and volleyball games. He hopes to have a career in radio and recently started working at WHIO Radio, helping to run programming and assisting with the broadcast of University of Dayton sports.

Neal said the staff is made up of passionate and motivated people who want to make WWSU the best it can be and is not just on-air personalities. He encourages students to consider working at WWSU, whether their interests are music, sports or social media or even computer science, engineering or administration.

“We will find a role for you and we will find a way to take what you love and turn it into something you can do at WWSU,” he said.

The station is especially interested in filling the engineering position, which will open in May when Schmalstig graduates. Applications will be available in February or March on Handshake. Those interested in the position can also email wwsu4@wright.edu.