Along with 31 of his fellow Wright State University Army ROTC cadets, he volunteered to spend a few hours cleaning headstones at the Dayton National Cemetery. It was a way for all of the cadets to honor the military veterans at their final resting places using soap and scrub brushes.

But for cadet Markus Perry, the March 18 act of community service had special meaning. The grave of his grandfather, a veteran of the Vietnam War, was among those who got Perry’s loving attention.

“To be honest, he’s the whole reason why I wanted to join the Army in the first place,” said Perry.

Established in 1867, the 117-acre cemetery has more than 58,000 graves. Perry grew up down the street and would often visit his grandfather’s grave, sometimes leaving a memento.

“Every time I accomplish something I come out here and update him and whatnot,” Perry said. “But to be able to come out here and actually spend some time cleaning his headstone — it’s got me a bit emotional, I’ll be honest. He’s a good man. He poured a lot into me, and this is the least I can do.”

The headstones, made of marble or granite, are provided by the Veterans Administration. They weigh about 230 pounds, are 42 inches long, 13 inches wide and 4 inches thick. 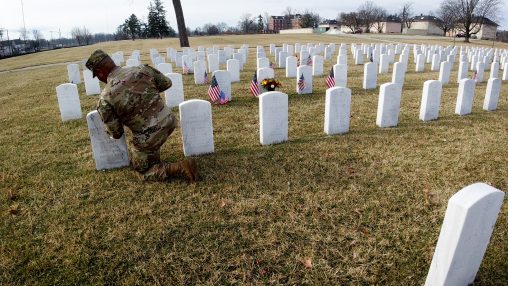 “It’s pretty amazing. You see thousands of headstones out here. It’s kind of breathtaking,” said cadet Benjamin Chatlin. “Every one of these headstones tells a different story.”

Lt. Col. Anthony Gonzalez, professor of military science at Wright State, said it is important that the cadets understand that community service is a big part of being an officer and leader. Helping beautify the cemetery brings that message home, he said.

“It’s been very well maintained, but we want to make sure we actually put our mark on it as well,” he said. “A lot of these people didn’t make it to old age, and we want to recognize their sacrifices. It’s the very least we can do.”

Perry said seeing the cemetery is a special experience, even if one is just driving by.

“But to actually be able to come here and step foot where these people are laid to rest, to be able to do a little bit of good and clean their headstones is huge, pretty big, especially with my grandfather being buried here,” he said. “It makes me feel very proud and very honored.”