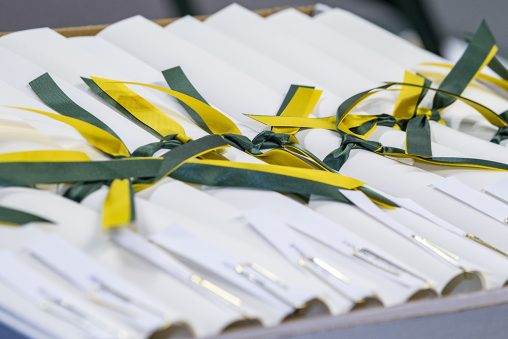 After four or more years of intense study and specialized training, 119 medical students from the Wright State Boonshoft School of Medicine received their M.D. degrees during the school’s graduation ceremony on May 1.

After four or more years of intense study and specialized training, 119 medical students in the Wright State University Boonshoft School of Medicine class of 2022 received their M.D. degrees during the school’s graduation ceremony on May 1 at the Wright State Nutter Center.

In addition to the conferring of degrees, the ceremony included a “hooding ceremony” in which graduates receive traditional regalia denoting their status and profession.

Students also took a professional oath to mark the start of their medical careers and signed a registry to commemorate their first use of the initials M.D. following their names.

Capt. Juliann Althoff, M.D., the executive officer of the Naval Medical Research Unit at Wright-Patterson Air Force Base and a 1995 Boonshoft School of Medicine graduate, delivered the commencement address.

Althoff has served in a variety of leadership positions across the U.S. Navy, Marine Corps and the joint operating forces. She completed flight surgeon training in Pensacola, Florida, and a residency in general public health and preventive medicine at the Uniformed Services University. 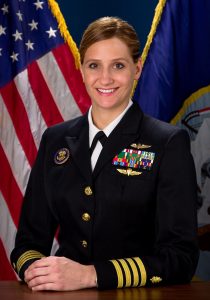 Juliann Althoff, a captain in the Navy and Boonshoft School of Medicine graduate, delivered the commencement address at the medical school’s graduation ceremony.

She also served as the executive assistant for the deputy surgeon general of the Navy, executive director of the Defense Health Board and chief medical officer of Naval Medical Center San Diego.

The Boonshoft School of Medicine presented the following awards for the 2021–2022 academic year:

Valerie Weber, M.D., dean of the Boonshoft School of Medicine, presented the Dean’s Award to graduating medical student James Elliott for demonstrating a commitment to academic excellence, embodying empathy and compassion toward others, exemplifying personal integrity and professionalism and earning the respect and trust of classmates and faculty.

The Teaching Excellence Award was presented to Gregory Toussaint, M.D., assistant dean for clinical skills education and associate professor of pediatrics, who was selected by the class of 2022 as the faculty member displaying outstanding professional skill and pride in discharging his instructional duties.

The Dan W. Elliott, M.D., Award was presented to Molly Scarbro, who is committed to a career in surgery and has shown outstanding performance in surgery during the clinical years.

The Department of Internal Medicine Outstanding Senior Student Award was given to Gregory Guzik.

The Department of Neurology Outstanding Senior Awards was given to Sanuri Gunawardena, Asia Payne and Maral Sakayan.

The Department of Pediatrics Award was presented to Kyra Bufi, who is committed to a career in pediatrics and has shown outstanding performance in pediatrics during the clinical years.

The Department of Psychiatry Outstanding Senior Student Award was given to Kelly Haller.

The Excellence in Public Health Award was presented to Steven Repas.

The Global Service Award was given to Jenna Braun, who has a history of volunteering and rotating in a medically underserved area internationally.

The Homer Cassel, M.D., Award, presented by the Dayton Society of Internal Medicine in honor of the late Dr. Homer D. Cassel, was presented to Zarmina Hashmi for outstanding scholarship and commitment to the specialty of internal medicine.

The John C. Worthman, M.D., Award was given to Henrietta Cautin, a student entering into the Wright State University Family Medicine Residency.

The Larry Lawhorne Award for Excellence in Geriatric Medicine, sponsored by the Ohio Department of Aging, was given to Alexander Long, for excellence in the study of geriatrics.

The Leonard Tow Humanism in Medicine Award was presented by The Arnold P. Gold Foundation to graduating medical student Avni Gupta and to faculty member Cassandra Milling, M.D., for consistently demonstrating compassion and empathy in the delivery of care to patients.

The Nicholas J. Thompson Award was given to Avni Gupta, who is committed to a career in obstetrics gynecology and has shown outstanding performance in obstetrics-gynecology during the clinical years.

The Society for Academic Emergency Medicine Award was given to Aaron Blevins, who has demonstrated outstanding proficiency in emergency medicine.

The Walbroehl Award for Family Medicine was presented to Helen Jones for excellence in family medicine.