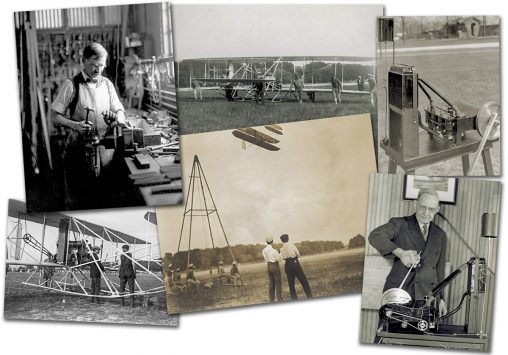 On December 17, 1903, the Wright brothers made the first controlled, sustained, powered flight. It lasted 59 seconds and traveled 852 feet.

As a member of the Wright State community, you have probably heard much about our university’s namesakes, inventors, and aviation pioneers, Orville and Wilbur Wright. Their innovative spirit brought them worldwide fame and admiration and a permanent place in our history books.

But did you know there was another important figure who was instrumental in achieving that first flight? That person was Charles “Charlie” Taylor, the Wrights’ mechanician—someone skilled in constructing machinery. Taylor designed and built the engine used during the first successful flight.

Charlie Taylor was born in 1868 in Illinois. He trained to be a tool maker. At age 24, he married Henrietta Webbert. They soon moved to her hometown, Dayton, and Taylor found work at Stoddard Manufacturing Company, where he made farm machinery and bicycles.

The Wright brothers began renting space for their bicycle shop in the Webbert Building, owned by Henrietta’s uncle, and soon Taylor went to work for the Wrights. He was hired to work on bicycles, but as the Wright brothers focused more on aviation, Taylor’s responsibilities increased. He helped run the bicycle business.

From 1900 to 1902, the Wrights tested their theories on flight by experimenting with kites and gliders. The next step toward manned flight was to find an engine with the required power-to-weight ratio to generate enough thrust to overcome drag.

The Wrights soon realized that such an engine was not available in the United States. They reached out to automobile and motor companies to ask them to manufacture such an engine, but none were willing to take on the project.

From their experiments, the Wrights knew they needed an engine with more than eight horsepower that could carry 625 pounds (plane and pilot). The engine could weigh no more than 200 pounds. The Wrights sketched out the engine, part by part.

They turned to Taylor for help. In just six weeks, Taylor completed the engine, and it far exceeded expectations. The engine generated 12 horsepower and only weighed 152 pounds stripped and 170 pounds with accessories.

Taylor continued to work for the Wrights until 1911. He helped with various projects, including experimental flights at Huffman Prairie and a military flyer.

In 1911, Orville lent his mechanician to Calbraith Perry Rodgers, who made the first flight across the continental United States, using an airplane purchased from the Wrights. Orville knew that Taylor was the only one who could keep the plane flying on the long-distance flight, which took 49 days and included 16 crashes.

For more information on the collections in the University Libraries Special Collections and Archives, visit libraries.wright.edu/special.