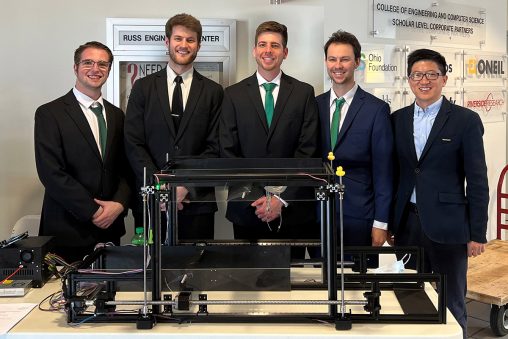 A group of Wright State University mechanical engineering students created a system to automate a transonic dual-plane wing, a design that Boeing and NASA say could enable aircraft to fly higher and faster.

The students’ work could enable the long-term study of transonic truss-braced wings and serve to educate future students on the aerodynamics of the wing structure.

The wing design inspired Zifeng Yang, Ph.D., associate professor of mechanical and materials engineering, and his students to study the parameters that control the performance of a dual plane wing. The mechanism can alter the horizontal and vertical distance between the airfoils, as well as the angle between the two airfoils through a user interface on a computer.

Yang said that the ease of control over the mechanism makes it a unique testing and teaching tool.

“The students contributed many more hours than the required time and effort for the capstone course,” Yang said. “I can tell they have enjoyed working as a team on this challenging project. The final success will serve as a cornerstone for every single team member’s future career.”

Since the end of the project, Kelly started working at ABX Air Inc. as an aircraft maintenance engineering intern and Stafford accepted a mechanical engineering job with Huntington Ingalls Industries. Kelly said he plans to pursue a private pilot’s license and is considering graduate school.

Kelly said the capstone project was an exciting experience for him. He enjoyed the hands-on experience of creating the mechanism.

The group utilized 3D printing for many aspects of their project, which Kelly said he grew to understand incredibly well.

“By the end of the project, I felt that I had a really good understanding on 3D printing and actually ended up purchasing a cheap 3D printer for myself,” he said.

Kelly said he has always been interested in engineering. He likes taking things apart and putting them back together and learning how machines work.

“Mechanical engineering was an easy choice for me,” Kelly said. “I have always been a huge car nerd and love getting my hands dirty.”

Charvat said that the project was an innovative one. He said the mechanism was difficult to work with and took a lot of hard work to ensure it was easy to use.

“The project enabled us to leverage each of our unique strengths to deliver the product we did,” Charvat said. “I learned a lot through this project, from teamwork to Python and everything in between. The most exciting thing I learned was a deeper understanding of embedded processors and writing code for them.”

Stafford said he was incredibly proud of his group and said they spent many late nights working on the projects.

“The project couldn’t have been done without my amazing team,” he said. “I am very fortunate to call them peers and friends.”

The students presented the mechanism at the Department of Mechanical and Materials Engineering Capstone Expo, where Yang said the students received high marks from the faculty judges.

Yang hopes to patent the mechanism and sell it to universities to use as an educational tool.