Uganda, water and the engineer 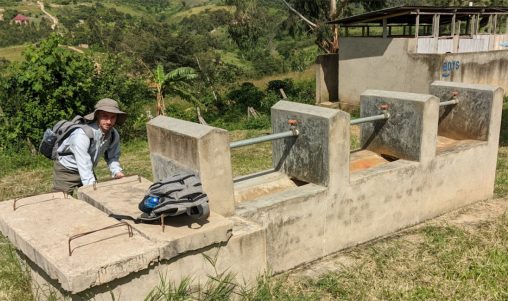 John Wilke, a biomedical engineering major, and other members of Wright State’s chapter of Engineers Without Borders traveled to Kabingo, Uganda, to assess how to renovate washrooms and latrines at a school.

When the academic year ended in April, Wright State University students generally were off to internships, vacations or back to classes. John Wilke did none of those. He went to Uganda to help the health of people in a small village.

And he’s going back next year to help finish what was started.

Wilke (the “e” is pronounced) is a Kettering native who is a rising senior and a biomedical engineering major in the College of Engineering and Computer Science. He started his academic journey at Columbus State Community College, attracted by the small class sizes.

After two years, he transferred to Wright State, allured by the biomedical engineering program and the opportunities the university offers. “I always liked the medical field,” he said.

While medical school and patient care weren’t in his plans, he is fascinated by the engineering that goes into medical equipment, everything from a heart valve to prosthetics to imaging devices.

One of those basic needs is clean water for drinking and sanitation. Engineers Without Borders’ Greater Cincinnati Professional Chapter conducted a massive clean water project for the small Ugandan village of Kabingo.

“I was curious. I found Engineers Without Borders interesting as a service group,” he said. “I was attracted to the fact that you can practice engineering concepts in a way that helps people. I thought that honestly, I would have no other opportunity to go to Uganda to do an engineering project.”

Wilke is quick to point out that the engineering involved is civil, not biomedical. However, adventure, service and benevolence appealed to him. 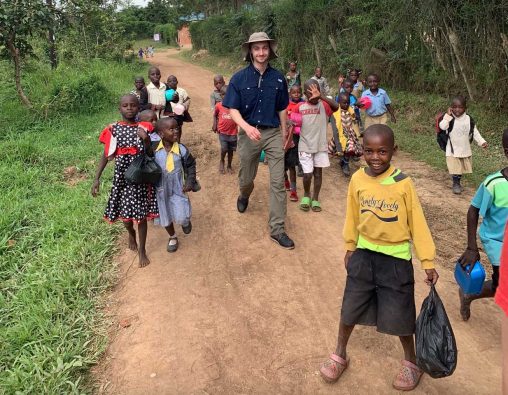 John Wilke and other students in Wright State’s Engineers Without Borders chapter will return to Kabingo, Uganda in 2023 to help work on the sanitation project.

Most recently, from May 17 to 28, Wilke was among a small group from Wright State that traveled to Kabingo to assess what needed to be done and how to meet those needs.

Wright State is working with St. Bakhita’s Secondary School to improve sanitation and washrooms. Wilke said an earlier Wright State Engineers Without Borders team “built two large hand-washing stations for the school, which has helped. But their latrines are in bad shape and require renovation and ventilation due to constant smell. We are also working on renovating their washrooms. One of the issues with their washrooms is poor drainage leading to standing water. Malaria is one of their main issues and standing water brings the mosquitos.”

In the fall, the students will work with local Ugandan contractors to develop plans to address those concerns, including renovating the latrines and washrooms and creating a construction schedule.

In the meantime, Wilke and the Engineers Without Borders chapter will raise funds in Dayton for the project. Fundraising has been ongoing — Wilke spoke at a fundraising dinner hosted by the chapter in March at the Wright State University Nutter Center to explain the village’s plight and what he and the other chapter members are doing to help.

Wilke said he and other students in the chapter will return to Kabingo sometime in 2023 to help work on the improvements.

“To get the opportunity to manage a project like this is awesome,” Wilke said. “To talk with community members, diagnose what they need and what’s feasible. Drawing up plans, creating a budget, fundraising, creating a schedule.” 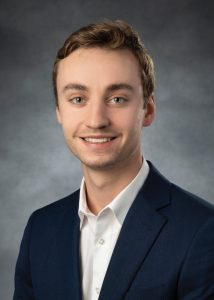 John Wilke is fascinated by the engineering needed to develop and build medical equipment.

He adds, “This is a far cry from what I’ll do as a biomedical engineer, but there’s some professional development that’ll help, and yes, there’s personal growth in this.”

Wilke is quick to acknowledge the university’s help. “Wright State has been supportive of our chapter,” he said. “They’re willing to work with us in whatever we might need, including helping post fundraiser links.”

He added that the chapter’s ranks thinned during the pandemic, when many students stayed away from campus and turned to virtual visits instead.

“We have maybe 12 or 13 active members. COVID cut into our numbers. We had about 25 students who actively attended meetings,” he said. “This year we hope we can drive up recruitment.”

Turning back to Kabingo, Wilke said, “The community there is amazing. It’s beautiful. They live on wide-open lands miles from the closest river. It’s a very communal culture. Kids walk an hour or two by themselves to get to school. The school has about 180 girls and 160 boys and 30 faculty — that’s who we’re doing this project for. They have sanitation needs that need to be fixed, and it’s cool we get to do that.”