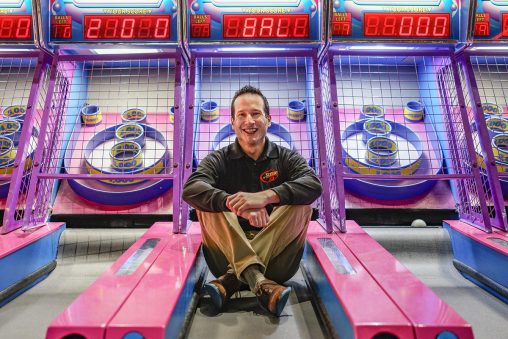 The Wright State Alumni Association recently recognized Jonah Sandler with an honorary alumni award for his significant support and contributions to the Raj Soin College of Business and its students. (Photo by Michael Rubenstein)

Jonah Sandler has his share of hobbies. He enjoys traveling, collecting sports memorabilia and spending time with loved ones. He is also a self-proclaimed workaholic. In his case, this is not necessarily a bad thing.

As the founder and chief entertainment officer of Scene75 Entertainment Center, Sandler oversees venues that offer something for everyone. Therefore, he walks into a festive environment daily.

“People who visit here are always happy and having fun,” he said. “It is infectious really and it permeates throughout everyone in the building. Offering entertainment to my home community is something for which I have a great deal of passion. And I enjoy the positive energy — work and fun really crossover for me.”

While Scene75 celebrates its 10th anniversary this year, Sandler can also reflect on how it has given him an opportunity to fulfill another one of his passions — education and community.

He has established a close relationship with Wright State University, serving on the Raj Soin College of Business Dean’s Corporate Advisory Board and participating in several strategic initiatives, including student engagement, recruitment and retention.

His contributions to the college and its students have been so significant that he was recently recognized with an honorary alumni award by the Wright State Alumni Association. Sandler’s recognition was part of the 2022 Alumni Achievement Awards, recognizing and celebrating the accomplishments of Wright State University alumni and friends.

Sandler became involved with the Raj Soin College of Business nine years ago through the Professional Business Institute, a summer camp for high school students through which they garner real-world business experience and receive exposure to Wright State. It’s an initiative he now sponsors.

“Not having graduated from Wright State University myself, I am honored to even have a chance to contribute in some way,” he said. “The university is so important to this region, and I full-heartedly believe in its mission and am continually blown away by the faculty who pour so much time, energy and care into each of the students I encounter on campus.”

A champion for Wright State students himself, Sandler serves as a judge for the college’s Wright Venture, a “Shark Tank”-style entrepreneurship competition.

He is working with the Raj Soin College of Business to establish a program so Scene75 can promote Wright State at each of its five locations while interacting with community members, thus enhancing the university’s footprint beyond the state of Ohio.

He has even taught a business course at Wright State.

“My involvement occurred as a result of informal relationships that continued to grow and led to opportunities to meet the dean and serve on his advisory board,” Sandler said. “It has been beneficial for everyone including Scene75, Wright State University and its students. I have truly enjoyed it.”

This was Sandler’s vision some 10 years ago. But it was kickstarted by unforeseen circumstances. After graduating from Washington University in St. Louis in 2004, he worked for Deloitte Consulting as a strategy and operations consultant. He subsequently earned an MBA at the University of Chicago Booth School of Business.

On the final day of Sandler’s summer internship in 2008, half of the team members in his office lost their jobs.

“That very same day I was granted an opportunity to return to the firm once I graduated. The timing was so wrong because I was no better than anyone else there,” he said. “It was at that moment I started to think about my passions and what I wanted to do in life. My career aspirations were to be able to have value in a community and the world we live in.”

This turn of events urged Sandler to return to his native Ohio, where his father was a real estate developer. He and his partners owned a building in Dayton that sat vacant for several years. They had tried to sell the building, but the current marketplace left their efforts fruitless.

Sandler saw an opportunity and with his father began to put in motion a plan to make an impact on the Dayton community. He and his father identified that there was an entertainment void in the city. They educated themselves through conferences and seminars and visits with other leaders in the industry to develop a plan.

Ideas were plentiful, but the same could not be said for start-up capital. So, Sandler worked through multiple negotiated revenue shares and partnerships throughout the building to generate capital.

Sandler engaged the community through Facebook and Scene 75 opened its doors in 2012. He has since published a book, “Before the Door Opened: How One Entrepreneur Captured the Hearts of a Community and the Attention of Facebook.”

“It hit on everything I am passionate about. Family is my No. 1 priority, and this was something that could help them. Also, it was an opportunity to build something to impact the community in a positive way,” Sandler said. “This rang true to my inner being. It’s quite fulfilling that this took off and I was able to establish a career in perhaps the most fun industry in the world.”

When Scene75 opened, it was 124,000 square feet with 50 to 60 arcade games. The community responded to the point that increased capital allowed Sandler to invest more into his business. Scene75 now has an additional 40,000 square feet, 200 arcade games, and an amusement park atmosphere that keeps families and their children returning for more. The most recent location includes an indoor roller coaster, go-karts and batting cages. Guests can also enjoy a full-service restaurant, nine private party rooms and a banquet venue.

The fun goes beyond Dayton. Scene75 opened family-owned locations in Cincinnati, Cleveland and Columbus and will open a suburban Chicago site this fall. It has more than 1.5 million guests per year.

But his success has not come without challenges. In May 2019, a catastrophic tornado ripped through the Dayton community, almost destroying Scene75 and rendering it inoperable for 18 months. The business was in its reconstruction process when COVID-19 forced four locations to close for several months, resulting in the permanent closure of its Pittsburgh site, which had opened in 2018.

However, Scene75 not only overcame formidable obstacles, but it is also growing in the process.

“We have encountered challenges, but we are in a position to continue investigating opportunities,” he said. “It has been an unbelievable journey that has been fulfilling in so many ways. Now, we are exploring other states and see buildings that need a rekindled love and communities with an entertainment void.”