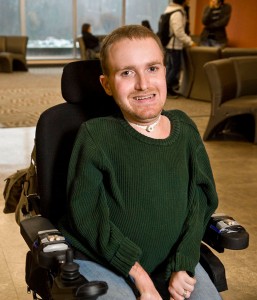 Zachary Holler ’12 was named to the President’s Committee for People with Intellectual Disabilities.

President Obama has appointed Wright State graduate Zachary Holler—a student leader during his time at the university—to a presidential panel designed to advise the federal government on matters related to people with disabilities.

The 24-year-old Holler, who received a B.S. in rehabilitation services from Wright State in 2012, was named in May to the President’s Committee for People with Intellectual Disabilities.

“I kept the matter quiet and reminded myself not to get my hopes too high as I awaited the results of my application,” Holler said. “Having just begun my career, I knew full well that many—if not most—applicants likely had a higher level of experience than what I have attained thus far.”

Holler said most of his knowledge, expertise and experience with disability stems from a genetic condition that has left him hearing impaired, visually impaired and a quadriplegic.

“I intend to draw upon these experiences, along with my skills in leadership and advocacy, to bring fresh ideas to the committee through the eyes of a person with multiple disabilities who has had to overcome numerous barriers simultaneously,” he said.

The committee, established in 1966 by President Lyndon B. Johnson, serves as a federal advisory panel to the president and secretary of health and human services on matters relating to persons with intellectual disabilities. The panel promotes policies and initiatives that support independence and lifelong inclusion of people with intellectual disabilities in their respective communities. 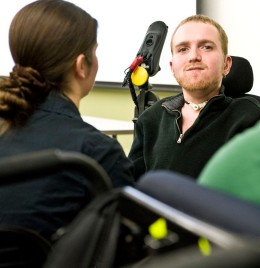 Zachary Holler also plans to pursue a master of divinity degree from the United Theological Seminary.

Holler’s sister, Mallory, is currently a Wright State student and, like her brother, has severe disabilities. Their father, Greg, says he and his wife, Kim, have always encouraged their children just to be themselves.

For Zach, being himself is being a high achiever.

At Wright State, he carried a 3.82 grade point average while holding a part-time job. He interned with the American Association of People with Disabilities in Washington, D.C., and with the Administration on Intellectual and Developmental Disabilities. And he was associate director of disability affairs for Student Government and president of Abilities United, a campus group striving to unify students and students with disabilities.

Holler was youth development coordinator at Access Center for Independent Living in Dayton from 2011 to 2013. He worked as a deaf role model at the Sinclair Community College ASL Lab from 2010 to 2011 and as a human resource assistant intern at Wright-Patterson Air Force Base in 2009. He also served as a member of the Consumer Advisory Committee of the Ohio Rehabilitation Services Commission and as a delegate for the Ohio Governor’s Council on People with Disabilities at the Ohio Governor’s Council Youth Leadership Forum

Since December, Holler has devoted most of his time to leading Bridge Builder’s Abilities Ministry, a disability ministry at Christian Life Center, which he co-founded in 2012. He has been accepted as a candidate to receive his master of divinity degree from the United Theological Seminary and will begin the program in September, with the goal of pursuing a career in ministry.

The presidential committee consists of 19 citizen members appointed by the president and 13 federal government members who meet periodically and report findings to the president.

Holler says he is honored to be a presidential appointee and looks forward to working with his fellow committee members to promote policy change that will maximize inclusion of people with intellectual and developmental disabilities.

Holler would like to see the committee address enhanced access to higher education, vocational training, employment and independent living for people with intellectual and developmental disabilities. He said that could include improvements in Medicaid, Vocational Rehabilitation and transportation, as well as incentives for states to update their standards of teaching and performance required in the public school system.