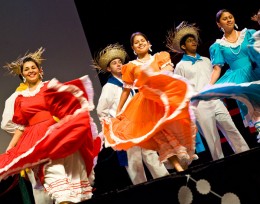 Grab your amigos and join Wright State University in a colorful monthlong celebration of Hispanic heritage.

Over the coming weeks, Wright State’s Asian/Hispanic/Native American Center (AHNA) will host events across campus ranging from fiestas and salsa lessons to lectures and film screenings.

Take part in the first event of Hispanic Heritage Month to experience Latin music, salsa and merengue lessons by DJ Gomez, cultural booths hosted by the Spanish Club, arts and crafts, games, vendors and much more. A food truck by El Meson will also be present.

Every day dozens of decommissioned school buses embark on a southward migration from the United States to Guatemala, where they are repaired, repainted and resurrected as brightly colored camionetas that bring countless Guatemalans to work each day.

Since 2006, nearly 1,000 camioneta drivers and fare-collectors have been murdered for either refusing or being unable to pay the extortion money demanded by local Guatemalan gangs. “La Camioneta” follows one such bus on its transformative journey.

J. Derek Lopez, Ph.D., professor of psychology and director of the Center of Academic Enrichment, Colorado State University-Pueblo, will examine the changes in self-efficacy among Latinos during the freshman year in a highly selective institution. Results indicate that gender differences exist during this period. Males rate themselves high in self-efficacy at the beginning of the year, while females rate themselves low. An interaction effect occurs at the end of the year, and the ratings of self-efficacy are similar for both males and females. Possible explanations for the interaction effect will be discussed at the event.

In this rare interview, Nobel Prize-winner Gabriel García Márquez (1927-2014) discusses his best-selling novels, including “One Hundred Years of Solitude” and “Love in the Time of Cholera,” his role in Latin American cinema and his foray into melodramatic soap opera.

Xochitl Bada, Ph.D., associate professor of sociology at the University of Illinois at Chicago, will discuss how the face of international, cross-border philanthropy and volunteering is changing. The Mexican Hometown Associations are grassroots communities in the United States that band together to send monies to their foreign hometowns for community and economic development. These associations have formed to respond to a need that has failed to be met by or is not effectively met by the government.

Learn different aspects of Día de Muertos, a day of celebration for people of Latin America, in particular Mexico and Central America, to honor the dead and the cycle of life and death. Attendees will paint masks that will be added to the altar display in the AHNA Center.