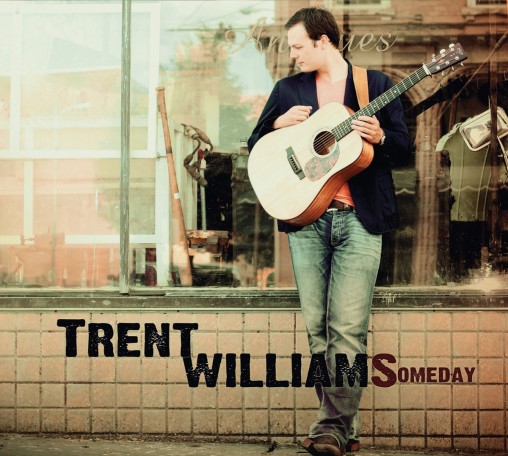 When he arrived at Wright State University as an incoming engineering student, among the items in Trent Williams’ pickup truck were his guitar, banjo and mandolin.

“I put them under my bed in my dorm room,” Williams recalled. “Everyone thought I was the weirdest guy in the world.”

But Williams’ passion for music has paid off. The bluegrass musician has just released his first solo album – a labor of love titled “Someday.”

This comes at a time when Williams is poised to graduate with his bachelor’s degree in electrical engineering. The two disciplines are an unusual mix, raising more than a few eyebrows among his fans.

“When they ask you what your degree is, that’s priceless – the look on their faces whenever you say electrical engineering,” he said. “I have fun with it.”

Williams’ gets his love for engineering honestly. His father is an engineer for the Ohio Valley Electric Corp.

“I’ve wanted to be my dad my whole life,” said Williams. “I remember going to work with dad when I was in a car seat. That was back when he still climbed transmission towers.”

Williams grew up on a farm outside the southern Ohio village of Piketon, best known for its uranium enrichment plant. He was into horses and never missed a county fair until last summer (because of musical obligations).

When Williams was 7, his father – who has played southern Gospel music since he was a teen – took him and his older brother to a little music store and bought them mandolins.

Trent’s brother, who at the time was attending Wittenberg University, would take lessons all week and come home and show Trent what he had learned.

“Ten minutes later I could play it,” said Williams, who has never had a lesson. “It really made him mad.”

Williams grew up listening to old-time bluegrass, gospel and a lot of Merle Haggard. But he was also influence by the classic country of Garth Brooks and Alan Jackson. 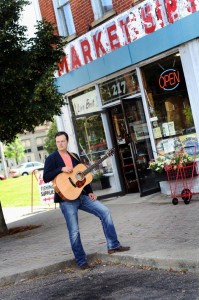 Trent Williams began recording “Someday” in a Cincinnati studio last November and hopes to one day perform at the Grand Ole Opry. (Photo by Jenny Buckler)

Among the instruments Williams plays is the dobro, a resonator guitar whose sound is produced by metal cones instead of a wooden sound board like its acoustic counterparts.

Williams attended Piketon High School and took college courses full time at nearby Shawnee State University his junior and senior years. He graduated at the top of his high school class with a 3.89 GPA and arrived at Wright State in 2011 with 52 semester hours already under his belt and nearly junior status.

Williams had toyed with the idea of becoming an aerospace engineer and working for NASA and then thought about going into the nuclear field. He finally settled on electrical engineering because he knew the industry and it would give him many career options.

He came to Wright State because of its strong engineering program and because he liked the feel of the campus and the comforting presence of Wright-Patterson Air Force Base.

“It’s the best choice I ever could have made. The engineering department is great,” he said.

Last November, Williams began recording his album “Someday” in a Cincinnati studio. It was released Aug. 1. The soulful, banjo-rich, lyrically smooth album features songs with intriguing titles such as “Only Goodbye,” “Another Bridge to Burn,” “Wicked Path of Sin” and “Perfectly Heartbroke.”

“It was a huge feat,” Williams said. “This album has absolutely changed my life. The music has consumed me.”

The lyrics of the album’s title track seem to be a reflection of Williams’ life.

When I was a young man writing my songs
Said down in Nashville is where you belong
I said someday, yeah maybe someday
I knocked down the doors and I wore out my shoes
Spent all my money paying my dues
Someday, maybe someday

The album is available on iTunes and Google Play and at one point was the second most downloaded bluegrass album on AirPlay Direct. In addition, more than 300 hard copies have been sold. Williams himself has shipped CDs to customers in Australia, the Netherlands and even to a country he had never heard of.

He spent much of this past summer playing in Smoky Mountain Tunes and Tales, a series of musical and artistic street performances in Gatlinburg, Tenn. His lifetime goal is to play at the Grand Ole Opry.

In the meantime, Williams is preparing to graduate in December. He has engineering job offers in Ohio and Tennessee, but is hoping that his music career will catch fire.

“I would love for music to just go crazy right now,” he said. “Somehow the album decides to explode, and I can play music for the rest of my life.”