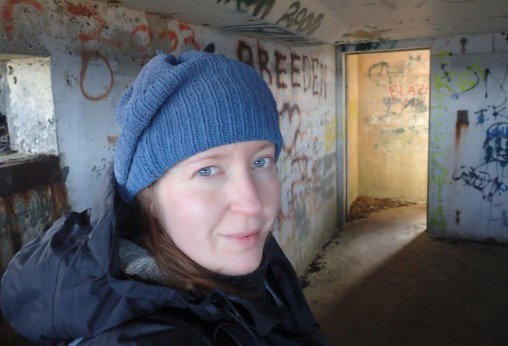 Marnie Leist , a 2001 Wright State art history graduate, is curator of collections at the Alutiiq Museum in Kodiak, Alaska, helps promote the heritage of Kodiak and published a book on the recovery of artifacts from a now-vanished Alutiiiq archaeological site.

It was irresistible. A job opportunity in remote and stormy Kodiak, Alaska, working at a museum devoted to chronicling and celebrating the history and culture of the Alutiiq, a native Alaskan tribal people.

Marnie Leist didn’t blink an eye. She accepted the job without even seeing the museum or Kodiak.

Today, the Wright State art history graduate is curator of collections at the Alutiiq Museum, responsible for managing and preserving its 250,000 objects. She is also a moving force in promoting the heritage of Kodiak and just co-published a book that details the recovery of artifacts from a now-vanished Alutiiiq archaeological site.

“We have created an inviting environment to celebrate Alutiiq culture,” said Leist.
The Alutiiqs have a long and storied history. They have traditionally lived a coastal lifestyle, subsisting primarily on resources of the sea, including salmon, sea mammals, birds and shellfish. Today many Alutiiq people live in coastal fishing communities, where they contribute to the modern economy while maintaining the cultural value of subsistence.

Kodiak, a remote town of about 7,000, sits on Kodiak Island, one of the nation’s largest, second only to the big island of Hawaii. Windy, stormy and rainy, Kodiak is a major producer of fish and boasts the nation’s largest U.S. Coast Guard base and, of course, the biggest brown bears on the planet.

Kodiak is where the Russians’ conquest of Alaska took hold in the late 18th century. Under American rule, Kodiak was for a time the headquarters for the Aleutian campaign against the Japanese during World War II.

Leist grew up in Dayton’s South Park Historic District, where her parents restored three homes and worked to improve the neighborhood. Her father is a videographer and editor for WHIO and Cox Media Group. Her mother is a hospice nurse and real estate agent.

“Their civic engagement instilled in me, albeit many years later, the same commitment to contributing to a healthy sustainable community,” Leist said.

At Colonel White High School for the Arts, Leist developed an interest in photography, pottery and historic architecture. 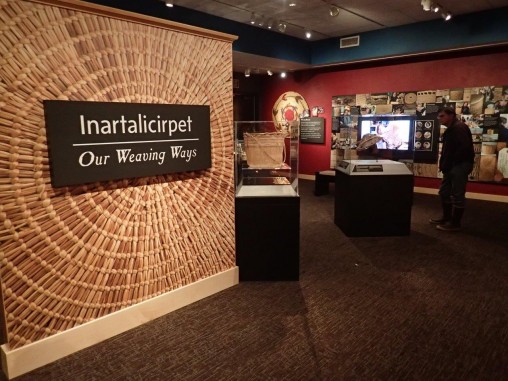 Her interest in Wright State was piqued by a saavy and articulate family friend she admired who was a professor of art history at the university. After touring the campus and meeting with faculty, Leist was sold on the art history program.

“The program was straightforward and the courses well-planned,” she said. “The dedicated and proficient faculty and staff provided an exuberant learning environment.”

In Kodiak, Leist has been given many opportunities that go way beyond usual museum work. She and her team have overcome the obstacles of being on a remote island to do the daily work of serving the public while creating innovative programs such as Community Archaeology and Traveling Traditions and developing interactive exhibits with international partners.

“I have seen troubled kids inspired by our programs and change their life decisions,” she said. “I am proud to have helped build future leaders.”

Besides managing the museum’s objects and preserving collections in perpetuity, Leist provides support for everything from donor relations to public programs and helps attract grants and contracts for collections that are vital to the museum’s financial well-being.

Leist is also vice president of the primarily volunteer-run Kodiak Maritime Museum. She has helped create events such as the Harbor Lights Festival, which has become one of Kodiak’s most popular celebrations. She and her team are also embarking on a campaign to build an interpretive center for the Thelma C, a restored boat that will be used to tell the story of salmon fishing at Kodiak.

Leist has just co-authored a book titled “Kal’unek-from Karluk: Kodiak Alutiiq History and the Archaeology of the Karluk One Village Site.”

For 600 years, the Alutiiq built houses on top of previous houses, preserving layers of their way of life. When water from a nearby pond seeped through the deposit, the massive mound of cultural history at Karluk One became suspended in time. Yet its location at the mouth of a river meant it could disappear at any moment.

The book recounts how researchers and community members recovered more than 26,000 items made of wood, bone, ivory, baleen, antler and leather before the river finally shifted and washed away the site forever.

Leist led efforts to document the 500-year-old assemblage of the items with rare organic preservation. Everything from baleen lashing on carving tools to painted dolls used in shamanic rituals was preserved.

Leist rehoused the collection, standardized terminology in the 646-page catalog and worked with Alutiiq Elders on the book, which she believes will be a resource for generations to come.