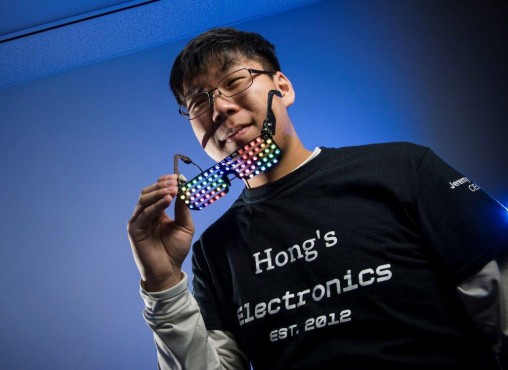 Wright State junior Jeremy Hong turns his interest in electrical engineering into his own electronics company. (Photos by Erin Pence)

He’s a Wright State University electrical engineering student, a ham radio operator and founder of his own electronics company. But it’s Jeremy Hong’s digital sunglasses whose colorful LED lights gyrate to dance music that really get your attention.

The creation of those pulsating party shades recently landed Hong on the cover of the University of Pennsylvania’s engineering magazine after he showed up with them at a hackathon engineering challenge in Philadelphia and was dubbed The Walking Rave.

Hong is no stranger to nicknames. He is also sometimes called The Hongger or DJ Hong, for his disc jockey work at parties playing electronic dance music and “making cool sounds with circuits.”

Hong has an infectious laugh and sense of humor. On this particular day, he is wearing a black hoodie with the words: “Trust me, I’m an engineer.” And his laptop computer is plastered with a riot of colorful stickers.

Hong just seems to be having a lot of fun. But his accomplishments are many.

He spent much of his childhood in Dublin, Ohio, the son of South Korean immigrants and whose father is a computer programmer. As a boy, Hong was deep into Legos, those colorful interlocking plastic bricks that can be used to create buildings, vehicles and even working robots.

After following the instructions and building the contraption for which the Lego kit was designed, Hong would take it apart and make something totally different, such as an aircraft, spaceship or castle. 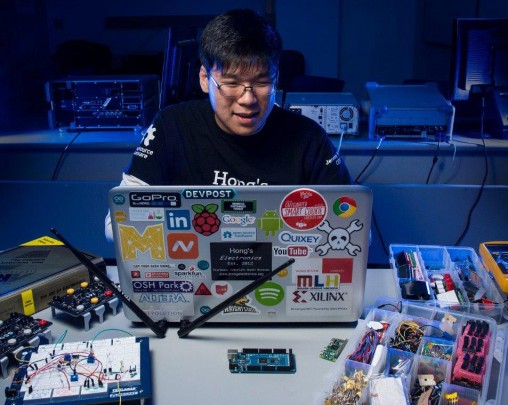 Jeremy Hong works as a lab assistant and consultant for the Department of Electrical Engineering and interns at Wright-Patterson Air Force Base, helping design and verify complex circuit boards.

At Dublin-Scioto High School, Hong joined the robotics team, which he would eventually lead.

“It turned out to be the best thing ever,” said Hong. “I fit right into electronics group.”

The team would build a robot that shot basketballs at a hoop.

“They weren’t kidding when they say, ‘It’s the hardest fun you’ll ever have.’ It really is,” said Hong. “When you get thrown into it, it’s kind of overwhelming. It’s really commercial-grade electronics. We had to weld stuff together and all the soldering of little electronic parts. It was quite involved.”

By the beginning of his junior year, Hong could read schematics and assemble circuit boards. He set up an electronics laboratory in the rear of his mother’s alterations business, where he built and sold phone chargers made from Altoids tins and nine-volt batteries.

About the same time, Hong started a blog that would lead to him founding Hong’s Electronics, a company that resells hobby kits and refurbished electronic testing equipment to engineers and hobbyists.

Hong’s blog caught the attention of a professor at Case Western Reserve University, who recruited him with a campus visit and a tour of the university’s circuits lab.

But Hong later discovered Wright State during a visit to Dayton, when he stopped at Mendelson’s and Midwest Surplus to stock up on resistors, capacitors and other electronic components.

Wright State’s affordability and academically strong College of Engineering and Computer Science won him over.

Hong, a junior, works as a lab assistant and consultant for the Department of Electrical Engineering. He recently helped build an oversized, ceremonial light switch for the holiday tree lighting ceremony on Courthouse Square in Dayton. And he is interning at Wright-Patterson Air Force Base, helping design and verify complex circuit boards.

“It’s stuff I could never dream of doing at home,” he said.

Hong hopes to get his master’s degree in electrical engineering and study power electronics. He wants to run Hong’s Electronics full time but is also interested in defense and space electronics.

“There is no better place for engineering students than Wright State. If I could describe Wright State in one word it is opportunity,” he said. “The defense contractors in the area are looking for interns.”