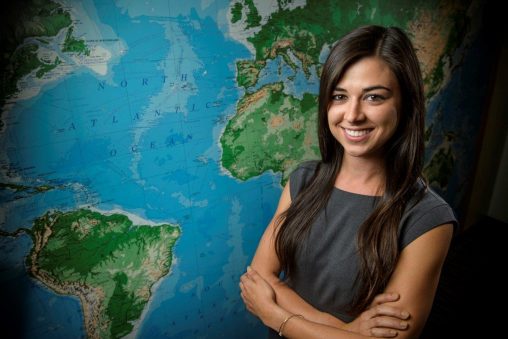 Tasha Fox, who earned a bachelor’s degree in French and is now pursuing her MBA at the Raj Soin College of Business, has taken study abroad trips to Belgium, Tanzania, China, France and Israel. (Photos by Erin Pence)

Fox grew up in Xenia. Her father works at Wright State in Student Health Services, and her mother, who received her MBA at Wright State, works as a project manager for Hewlett-Packard Enterprise.

After graduating from Yellow Springs High School in 2011, Fox spent a year in Brussels, Belgium, as an exchange student. Although she had taken French in high school, she initially struggled a bit in communicating with her French-speaking classmates and Belgian residents.

At one point, she felt it was too much to overcome and thought about returning home.

“But it ended up being one of the best experiences I could ever hope for because it pushed me in a way that I’d never been challenged before,” she said. “I ended up learning French, and I never thought I was capable of that.”

When Fox returned to the United States, she enrolled at Wright State because it was financially attractive and she was offered several scholarships.

During her freshman year she went on a three-week study abroad trip to the African nation of Tanzania organized by the College of Nursing and Health.

In the fall of 2013, Fox received a scholarship to teach English in China, near the northeastern city of Dalian, for a semester.

“It was a culture I had never really been exposed to,” she said. “Chinese was a language which was not attainable in my mind. But I learned a lot more than I thought I was going to. By the end of it, we all had to have a 10-minute conversation in Chinese for our final exam.”

In January 2015, Fox left the country again to study in France, taking classes in business, French culture and geopolitics at two different universities.

Then over the summer, she traveled on her own to Morocco and took the opportunity to do some camping in the Sahara Desert. (It was chilly, and she didn’t experience any sandstorms.)

Then Fox went to Israel, where she volunteered for six weeks at Project Harmony, an English summer camp in Jerusalem for Jewish and Arab Israeli children.

“I think Israel was one of the most life-changing experiences I’ve had,” she said. “I went into it pretty naïve. I didn’t know what I was in for. I had known a little bit about the conflict but not enough.”

Fox said she was surprised at the open racism in day-to-day life. The school where she taught was spray-painted with hateful graffiti, and she witnessed a stabbing at a gay pride parade.

“Everyone in front of me turned around and ran, and I knew something bad had happened,” she said. “I was really close. I jumped up on a wall to see what was going on and could see bodies and blood.”

An ultra-Orthodox Jew was arrested in the stabbing, which claimed the life of a 16-year-old and injured five other people.

Fox returned to the United States in the winter of 2015, graduated the following April with her bachelor’s degree in French and is now pursuing her MBA at the Raj Soin College of Business, where she works as a graduate assistant.

She is not sure about her career path.