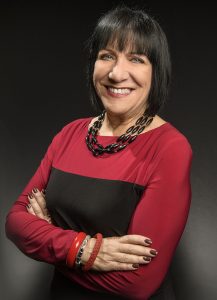 Wright State graduate Tina McPhearson will be inducted into the Huber Heights Performing Arts Hall of Fame for her contribution to excellence in the arts.

McPhearson graduated from Wright State in 1980 with a bachelor’s degree in speech and theatre education.

“She has been involved in so many organizations in so many capacities, including working as an actress, director, teacher, mentor, administrator and board member,” said Lois Schneider, a member of the Huber Heights Performing Arts Hall of Fame and a Wright State staff member and graduate. “After 40 years in the Dayton theatrical scene, she knows everybody or knows someone to contact.”

McPhearson was active on the stage throughout high school and was a member of the International Thespian Society, which recognizes student achievement in the arts.

She taught theater for 12 years at Trotwood-Madison High School, where she directed 35 plays and musicals.

McPhearson has also performed with almost every community theater in Dayton and has directed more than 55 shows in the Dayton area.

She began her career at the Victoria Theatre Association, eventually becoming the vice president of programming and education, where she scheduled more than 2,600 performances and raised more than $55 million in revenue. She now works as a consultant for nonprofit arts organizations.

McPhearson is a former Tony Awards voter and former member of the Broadway League. She is active on several boards and committees, including The Zoot Theatre Company, Grande Illumination, the University of Dayton Diversity Lecture Series and the Dayton Theatre Hall of Fame, and serves as the vice chair of The Dayton Playhouse board.

She served on the management team for the Benjamin and Marian Schuster Performing Arts Center, was the managing director of the Dayton Playhouse and was associate producer of the Pirate Playhouse in Florida.

McPhearson will perform in the Huber Heights performance showcase on Friday, March 10, at 7:30 p.m., and will be inducted into the Hall of Fame Saturday, March 11, at 6 p.m. Both events take place at Wayne High School.