After a 10-year break, Samantha Cornett returned to Wright State and is now thriving in the English program 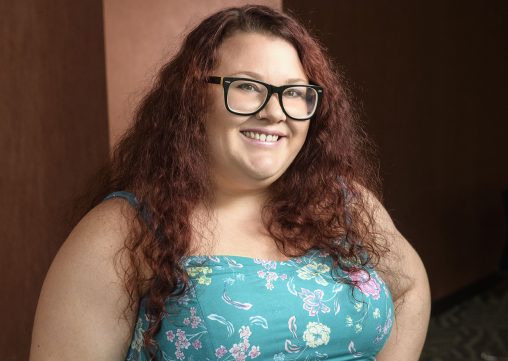 After a 10-year break, Samantha Cornett returned to Wright State and is now thriving in the English program. (Photo by Erin Pence)

It took more than 10 years, but Samantha Cornett has worked her way from the bottom to the top.

She arrived at Wright State University in 2005 fresh out of high school, foundered academically and within two semesters was an ex-college student working odd jobs to survive.

Today, the 30-year-old Wright State junior English major has a 4.0 GPA, is recipient of the prestigious Dion Scholarship for high achievers and is aspiring to go to medical school.

Cornett hopes her experience inspires others to return to college.

“You CAN do this, but you have to put in the work and you have to apply yourself,” she said. “No one else does this for you. But there is help. There are tutors, there are office hours, there are people that are always available for you — professors, your peers. And they are there to make sure you succeed.”

Cornett grew up in Waynesville, Ohio, a small community where “you picked your friends in kindergarten, and those were the friends you grew up with all through high school.”

She describes her family as blue-collar. Both parents and her brother work in factories.

As a girl, Cornett was an avid reader and at Waynesville High School was active in quiz competitions, color guard and theater — “anything that could flex my creative muscle.” She favors the complex, flowery language of classic literature and novelists such as Charles Dickens and Jane Austen.

After graduation, Cornett immediately enrolled at Wright State and was thrilled to learn she would room at Hamilton Hall with one of her high school friends. It was a new world and an exciting adventure, so much so that Cornett often skipped her classes. She said she “bombed.”

“Didn’t earn a single credit hour in two semesters,” she recalled. “Eighteen years old, fresh out of high school — I clearly was not ready.”

So Cornett put college in her rear-view mirror and went to work, holding a number of odd jobs until she finally landed a position as an administrative assistant at the Greater Dayton Apartment Association.

Fast-forward five years. Cornett realizes that a college degree is essential to her future. She meets with advisers at Wright State in hopes of getting re-admitted even though her confidence had been shattered and she knows the campus experience is going to be much different for her than it was 10 years earlier.

But she was determined to make college count this time and was accepted at Wright State in 2015 through the university’s Fresh Start Policy. She started as a part-time student because she continued to work and currently is employed at Carillon Brewing Co. as a server/bartender.

“I really needed to edge my way back into it because I needed to make sure I didn’t overwhelm myself because I would fail all over again and that wasn’t an option this time,” she said. “This is my future. I think when I was 18, I couldn’t see more than two weeks in front of me. Now I’m thinking way long-haul. That makes a huge difference.”

When she is not in school, Cornett works 58 hours a week.

“I make my money because I know I have to stockpile it for when fall and spring semesters come,” she said. “Money is always right at the front of my head.”

Then came the day that Cornett learned she had been selected by the Department of English Language and Literatures as the recipient of the 2017–18 Kathleen Pfister Dion Endowed Scholarship in English, reserved for a high-achieving student in the major with a demonstrable passion for English.

Cornett didn’t realize she had even earned the scholarship for several months after she received it because she had not been checking her Wright State email during the summer. She didn’t even know she had been nominated.

When Cornett saw the email, she immediately called her mother even though it was 11:30 p.m. and Cornett knew her mother would be asleep because of her work schedule.

“I started bawling and my mom started bawling because my mom was working overtime at the factory to try to help me with books and tuition,” Cornett said. “I told her she didn’t have to worry about that anymore.”

The scholarship covers nearly half of Cornett’s tuition. The rest is covered through another scholarship and several grants.

“It means everything, everything,” Cornett said. “I will not have to stress about finances come fall and spring semester. It’s unreal.”

Cornett minors in French and recently went to Paris for two weeks as part of a French class. Her mother worked overtime to pay for her flight.

Cornett’s left shoulder sports a tattoo of a purple sprig of French Lavender and a French phrase that translates as “my heart is ravished.” It is a lyric in a Josephine Baker song from the 1920s when the American was living in her adopted Paris.

Cornett got the tattoo at a parlor in the Montparnasse neighborhood of Paris as a souvenir (a French verb meaning “to remember”) of her trip. She got it after — as expected — she “fell in love with Paris.”

After earning her bachelor’s degree, Cornett wants to get her medical degree, encouraged that medical schools often like liberal arts majors because of their people-personality skills, problem-solving abilities and non-math and science perspectives.

She would like to become a forensic pathologist, professionals who determine cause of death by examining corpses. The interest stems from a high school experience when she attended Wright State’s interactive human anatomy lab.

“I was just enthralled,” she recalled. “To see what is inside the human body was fascinating.”