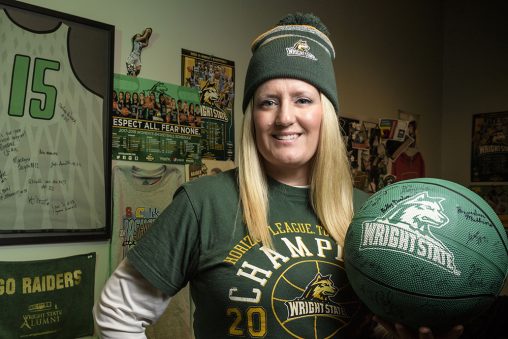 Kristie McKiernan, Wright State grad and senior English lecturer, is a superfan of the Raiders, missing only three home games and attending road contests as far away as Chicago over the past eight years. (Photo by Erin Pence)

Picture Jack Nicholson behind the bench of the Los Angeles Lakers or Spike Lee courtside for the New York Knicks. That’s the kind of basketball passion and devotion Wright State University senior lecturer Kristie McKiernan has for the women’s basketball team.

Over the past eight years, McKiernan has become a superfan for the Raiders, missing only three home games and attending road contests as far away as Chicago.

And from her seat on the floor, McKiernan makes her presence known at the games.

However, the Wright State players tell her they appreciate the unconditional love and support from her — screams and all.

McKiernan’s office in Millett Hall is a shrine to the team.

Hanging from the wall are team posters, a framed, autographed practice jersey of former player Symone Denham, a pink autographed handkerchief and a gray T-shirt that celebrates Wright State’s appearance in the NCAA tournament against Kentucky in 2014.

McKiernan says the games appeal to her love of basketball and her competitive nature. She admires the players’ stamina, skill, finesse and teamwork.

“These ladies have such heart — putting in body-punishing exhaustive hours of practice and game play week after week,” she said. “They do countless hours of community service, and they maintain stellar grades. They are inspiring young women, students and athletes.”

McKiernan, who has been at Wright State for 30 years, spent her teenage years in Urbana. Her father served as a police officer in Urbana and later became the police chief in the western Ohio village of West Milton.

After graduating from Urbana High School in 1988, McKiernan enrolled at Wright State, becoming the first member of her family to attend college. Inspired by a high school English teacher, she majored in secondary education English with the thought of teaching high schoolers.

But after earning her bachelor’s degree in 1992, she decided to stay at the university.

“Wright State was very much like home to me,” she said.

McKiernan accepted a graduate assistantship in the Office of Pre-College Programs, designing gifted and enrichment programs. The next year she landed a teaching assistantship in the Department of English Language and Literatures, and in 1995 earned her master’s degree in English, teaching composition and rhetoric.

McKiernan was then hired as an adjunct and in 2003 became a full-time faculty member. She is currently a senior lecturer, teaching Academic Writing and Reading as well as Research Writing and Argument.

She said many of her students today seem more committed to their education than ever. Many of them try to juggle school with jobs and family responsibilities and often have long commutes.

“So if they’re here, they’re invested,” she said.

McKiernan’s interest in the women’s basketball program began in 2010 after Courtney Boyd, a player who was in McKiernan’s English class, urged her to come to a game. So she did. And she was hooked.

McKiernan has since attended nearly every home game and many away games, sitting behind the team’s bench or on the floor directly across the court from them. She has attended road games in Indianapolis, Detroit, Chicago and Northern Kentucky.

“We met the team when they returned to the Nutter Center and went with them to learn who they would play in the NCAA tournament,” she said. “Going against UK was a great experience.”

She also attends the coach’s weekly radio shows and promotes the team over social media.

McKiernan has had several players in her class over the years and tends to root for them a little harder. She acknowledges being a bit boisterous, vocal and aggressive at the games.

“I’ve asked the players so many times, ‘Are you SURE that I’m not too…?” her voice trailing off.

“I want to make sure they know there are people out there for them,” she said. “The more people that come to the games, the better the teams do. But also the fans feel connected to the campus. So I always say, ‘Please come out to a game, but just ignore what I’m doing.’”