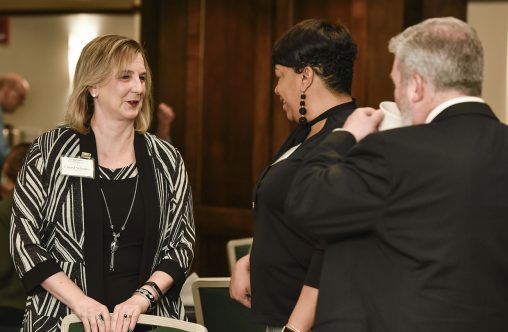 The Women’s Center is celebrating its 25th anniversary this year. Festivities include a breakfast in January attended by Wright State President Cheryl B. Schrader. The center will also host a reception on March 15 from 8:30 to 11 a.m. in 148 Millett Hall.

Since 1993, the Wright State Women’s Center has worked to promote equity, remove gender-based barriers and to provide diverse educational opportunities for the benefit of all.

Nicole Carter, director of the Women’s Center, said she is proud to work with the center and has seen it grow since she joined Wright State in 2015.

The center was originally founded with the Women’s Studies Program after the Task Force on the Status of Women in the Academy at Wright State University recommended the establishment of the program and center in 1992. The center was founded in 1993.

The Women’s Center, Carter said, has used many different approaches to meet student needs throughout her time working at the center. She said the center has grown from hosting small programs to direct outreach with individual students and groups. She anticipates that the Women’s Center will continue to grow.

“I know we will continue to meet the needs of student parents and caregivers on campus, but it continues to be an area of growth,” she said. “We plan to expand our cohort model that we started in the fall of 2017 where groups of women come together to participate in various workshops and trainings on leadership, mentoring, sisterhood and more.”

The Women’s Center is a community space, where everyone can gather in a safe place to use computers, library resources and get involved on campus. To continue this sense of community, the Women’s Center hosts events throughout the semester promoting health, wellness, feminism, activism and other political and economic issues.

Cindy Vanzant, assistant director of the Women’s Center, has worked with the center since 1994.

“My unknown passion for women, gender and social justice issues blossomed and grew from the day I began my work in the center,” she said. “Advocating for equality and violence prevention has been truly fulfilling and heartwarming.”