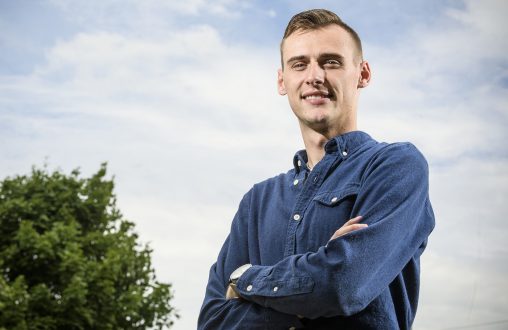 Brody Beaver is a guided missile. Determined to become an Air Force pilot, most everything the Wright State University mass communication student has done recently is with that in mind.

Beaver, 22, has enlisted in the Air Force, earned his private pilot’s license, is a member of the Ohio Air National Guard helping flight crews with logistics, has written articles on aviation history and even has his own photography business using drones.

That dream began at an early age.

Beaver grew up in Grove City, Ohio. His father was in the Air Force for 21 years, working in aviation resource management systems.

“He would tell me all of these great stories about all of his trips, deployments and the people,” said Beaver. “He was deployed to Turkey. He went to France. He got to hang out with all the pilots. I just fell in love with it.”

It was when he was in seventh grade that Beaver decided he wanted to join the Air Force and become a pilot. So when he turned 17 while at Grove City High School, he enlisted, having to get a permission slip from his parents because he was under 18.

Beaver plans to make a career of the Air Force.

“They’ll probably have to kick me out at 60,” he said with a smile.

He then returned to Ohio, where he attended Sinclair College so he could earn his pilot’s license. At the time, he was based in Springfield with the Ohio Air National Guard and had heard good things about Wright State. So he later transferred from Sinclair to Wright State without even taking a college visit.

Beaver majored in mass communication because he enjoys talking to people and being in front of a camera.

“But I also understand that communication is the key to success. It doesn’t matter what you do in life — communication is a must,” he said. “So I think being a mass communication major has enabled me to relate to people and better understand where people come from and their backgrounds and effectively communicate with everyone.”

“It’s just something I absolutely love — PR, being a DJ, being a news anchor or a journalist,” he said.

Beaver’s public-speaking skills recently got him gigs as master of ceremonies for a military ball and for the Ohio Airman of the Year ceremony, attended by commanders.

“It’s very honoring,” he said. “I’m very blessed that they would pick me. I’m at the bottom of the totem pole. I just try to represent my base well.”

Beaver says Wright State has set him up for success in communication.

“My professors have been very caring, and it’s genuine. They really care about my success,” he said. “They are the ones referring me to the right people for these job opportunities. And they are the right mentors to help guide me. It’s great to have that support system.” 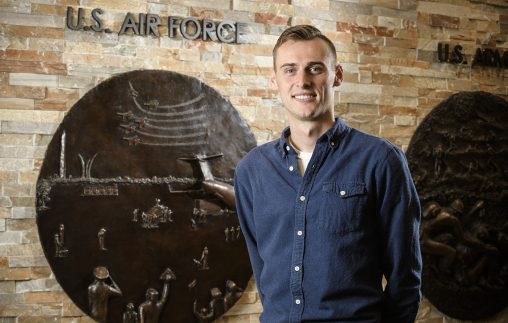 Beaver has also worked with Wright State’s Special Collections and Archives, writing articles about some of the artifacts stored and displayed there.

“We have the largest Wright brothers collection in the world,” he said. “I would love for people to just check it out. When you’re an aviation junkie, you pretty much live in the archives.”

Beaver also recently volunteered at the National Museum of the United States Air Force, helping teach children the basics of flying in a flight simulator.

In addition, he has earned his commercial drone license and started his own business called Just Drone It. He takes aerial photos and videos for real estate agents and their listings. He also does weddings and other family functions.

Beaver keeps his flying skills sharp by renting airplanes and flying around the state.

“I take my family and friends flying,” he said. “I like to fly to places that have good food. We go to Urbana for pie. We go to Columbus for barbecue. And we go to Cincinnati for hot dogs.”

Beaver is a busy guy. So what does he do to relax? No surprise there. He goes flying.

“It’s very therapeutic,” he said. “I think it’s just being able to defy gravity and having a bird’s-eye view of everything. It’s an adrenaline rush. There is no greater thrill than flying an airplane yourself.”