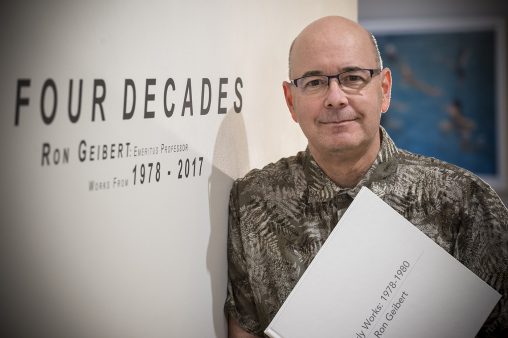 “Four Decades,” a retrospective of the work of Wright State art professor emeritus Ron Geibert, is on display in the Stein Galleries through Oct. 21. (Photos by Chris Snyder)

It’s an art show with an Orwellian tang. Arresting images on electronic kiosks inspired by the dystopian George Orwell novel “1984” explore how language and imagery can be twisted to create deception.

The video monitors throb with images designed to make gallery-goers think about half-truths, doublespeak and how history is remembered through a blurry lens.

“It’s about our fear of confronting the truth,” said Wright State art professor emeritus Ron Geibert, whose retrospective art show titled “Four Decades” is on display at the university’s Robert and Elaine Stein Galleries in the Creative Arts Center.

“Four Decades” is free and open to the public. It runs through Oct. 21. The galleries are open from 10 a.m. to 4 p.m. Wednesday to Friday and noon to 4 p.m. on Saturday and Sunday.

The show is complemented with Geibert’s photographs as well as artwork collected and organized by Geibert in more than a dozen art exhibitions at Wright State from 1986 to 2007. One of his juried projects drew 1,300 applicants from 60 different countries seeking to display their work. The retrospective also includes a reshowing of a 1986 show that features rarely seen photographs from the Great Depression.

“In one place you get to see everything I’ve done in my life as an artist,” said Geibert. “People are probably going to see work they’re not going to see anywhere else in the community.”

A pioneer of color photography, Geibert actually first studied aerospace engineering. But he was drawn to photography, shot landscapes in Nebraska and in 1978 segued into street photography.

“That’s when I discovered what I was meant to be as a photographer,” said Geibert, who joined the Wright State Department of Art and Art History in 1981 to teach photography.

Today, the 66-year-old Geibert is an accomplished, portfolio-rich artist whose photographs can be found in New York City’s Museum of Modern Art, the Bibliothèque Nationale in Paris and the Smithsonian, Library of Congress and Corcoran Gallery in Washington, D.C., and elsewhere.

Some of Geibert’s artwork at the retrospective are “sliver” prints — photos of ballet movements and fighter planes that are cut into thin slices and then joined together to create a new image. Panoramic landscapes were created by placing seven square images together. 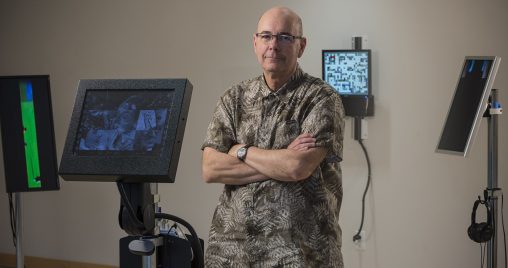 “Four Decades” features Ron Geibert’s electronic kiosks that were inspired by George Orwell’s “1984,” exploring how language and imagery can be twisted to create deception.

The collection art features photos of water from a scientist-turned-photographer David Goldes, who calls water one of the most symbolic substances in human history and one of the most difficult to photograph.

One of the most popular photos in the collection is one of people who appear to be made of Cheetos. And there’s a cathode ray tube with the image of a human skeleton that appears when motion sensors are activated.

But some of the most intriguing images flash from Geibert’s Orwellian electronic kiosks.

On one kiosk, letters in a crossword puzzle materialize one by one to spell out the final paragraph of 1984, culminating with the words “He loved Big Brother.” Another kiosk centers on the theme of “witnesses.”

“So often today we are spectators to activities,” said Geibert. “When we witness something, the question is now do you become a participant?”

The monitor displays a vertical sliver of the Zapruder film of the Kennedy assassination in Dallas. Seen as if one is lying on the ground when the shots are fired, it’s a looping blur of green and black images until Jackie’s pink pillbox hat floats by.

Geibert said the retrospective is a celebration of the wonderful career opportunities he received at Wright State.

“I got to do something in my career that was challenging, that I loved and that I grew in. How many people get to do that?” he said.