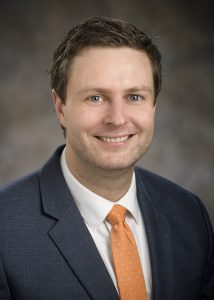 Lee Hannah, assistant professor of political science, received the 2018 Faculty Award for Excellence: Early Career Achievement for his effectiveness as a teacher and perceptiveness as a scholar.

Hannah brought stability to the School of Public and International Affairs, taking responsibility for classes that were either unavailable or taught by adjuncts. By leading these classes, Hannah provided valuable service to students who were able to take these classes from full-time faculty.

Throughout his time at Wright State, Hannah has represented the university in the media, regularly providing expertise as a political scientist to WYSO Public Radio, WDTN, Fox 45 and WHIO, along with newspapers such as Dayton Daily News.

“When students see their professors on TV or hear them in the radio, the experience evokes a sense of pride that strengthens their connection to the department and Wright State in general, adding another layer of credibility to our brand,” said Carlos Costa, assistant professor of political science.

In the three years Hannah has worked at Wright State, he has published five articles that in notable outlets and co-authored an article published in the journal Science. The article has been downloaded over 5,000 times and has received coverage by The New York Times, CBS, Time, Slate and The Washington Post.

Jazmin Perez, a political science graduate, said Hannah had a tremendous impact on her education. She thoroughly enjoyed his classes and through his guidance, worked at a legal internship.

“I can tell this is something he consciously moderates,” Puckett said. “I don’t think I’ve seen him take a partisan side once during class.”