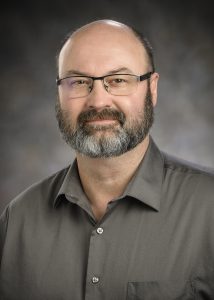 He is known for being helpful, professional and extremely committed to helping his peers in any way possible. His kindness and perseverance inspire his fellow peers and make him a true role model.

As Stuart’s workload increased dramatically over the past year, his commitment to excellence and innovation remained unaltered. While maintaining his current responsibilities, Stuart found the time to develop an online ticketing system to streamline client communication and prioritize analytics workload. Additionally, he leveraged automation and new reporting mechanisms to streamline information delivery across the advancement division. Finally, he developed Rowdy Rollcall, a mobile application to track alumni attendance at home basketball games in real-time.

Stuart garnered the respect and admiration of his peers for being so reliable and trustworthy during any project or job. One of his co-workers said, “He has managed not only to maintain all services previously provided but has also established several new innovations that have allowed the Advancement Division to complete the comprehensive Rise. Shine. Campaign for Wright State and continue to raise much-needed support for university scholarships and programs.”

Stuart’s importance to his peers and Wright State is immense. A colleague illustrated this best by saying, “Without staff like him, we would be much worse off and functions may have actually ceased to exist.”