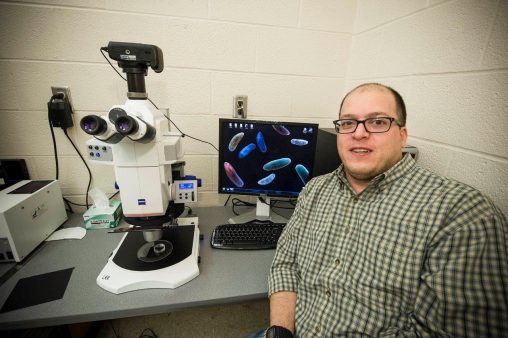 A research grant secured by Labib Rouhana, associate professor of biological sciences, was renewed by the National Institute of Child Health and Human Development.

Wright State University researchers received renewal of a $447,441 federal grant that supports biology courses in which students learn techniques that are fundamental to solving current biomedical challenges such as detecting coronavirus or developing a vaccine.

The award from the National Institute of Child Health and Human Development is for a project led by Labib Rouhana, associate professor of biological sciences, titled “Discovery of Germline Genes and Regulatory Networks in Planarians.”

The project is designed to identify genes with conserved functions in human reproduction and offer promise for breakthroughs in infertility. The researchers study the planarian flatworm, which can regrow its reproductive organs from stem cells.

All animals, from the simplest worm and most vicious parasite to cattle and humans, use much of the same genetic machinery to ensure successful sexual reproduction.

“We use flatworms to uncover these processes, but our findings have broad implications — from pest control to farming, development of contraceptives and human fertility,” said Rouhana, who earned his Ph.D. in genetics from the University of Wisconsin.

One goal of the project is to provide students an opportunity to be involved in research. Not all students join research laboratories as undergraduates. Four undergraduate students and two graduate students work in Rouhana’s lab. However, nearly 100 students in the College of Science and Mathematics contribute to the research each spring and summer when they take a molecular biology lab course required of all biological sciences majors.

“This formative experience translates into student preparedness for application of molecular techniques in basic research or in response to a pandemic like the one we face today,” said Rouhana. “Molecular biology techniques learned in the course are fundamental to coronavirus detection and vaccine development.”

Being a renewal, the award attests to the quality and productivity maintained by members of the laboratory and enables it to continue conducting and publishing its research.

Before Rouhana arrived at Wright State, he identified about 1,500 out of the flatworm’s 25,000 genes that may be expressed in the testes or ovaries.

Planarians have an extraordinary ability to regenerate lost body parts. A planarian can grow a new body from its severed head and a new head from its severed body. Stem cells are biological cells that can differentiate into specialized cells and divide to produce more stem cells. They can be artificially grown and transformed into muscles or nerves.

Rouhana is using the planarian to analyze gene expression in stem cells because they comprise as much as 30% of the flatworm’s body, and they are continuously proliferating and differentiating into the cells that are required for study.

Some of the stem cells develop into the flatworm’s reproductive cells, and different genes are switched on and switched off as part of that development. Much of the genetic material activated in this process is similar to that of humans.

Chemical treatments and fluorescent light make the planarians’ cells permeable and nearly transparent. The cells are then dyed so that specific gene expression can be seen under a microscope.

Rouhana became interested in biology while he was at the University of Texas-El Paso when he learned that scientists were sequencing the human genome. After working in a summer research program in New York City, Rouhana decided that trying to unlock the secrets of the genome was how he wanted to spend the rest of his life.

He received his bachelor’s degree in biology at Texas-El Paso and his Ph.D. in genetics from the University of Wisconsin. Then he worked in planarian laboratories in Kyoto, Japan, and the Howard Hughes Medical Institute at the University of Illinois. He joined the faculty at Wright State in 2013.