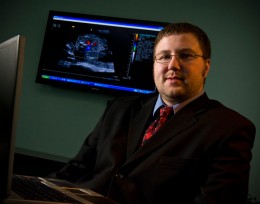 When Rose Hedger went into labor more than three months before her due date, she feared the worst. Less than a year earlier, she had lost her baby after premature delivery of the child at only 20 weeks.

The 34-year-old Milford woman had taken every precaution to try to avoid a second premature birth. She stopped exercising, put herself on bed rest before the doctor did, and even had her husband pack lunches and place them in a cooler next to the bed to avoid getting up.

As she went into labor, her mind raced back to the loss of her baby a year earlier.

“I could feel him kick on a daily basis, even up until five minutes before I delivered. They told me once he was delivered that he just wouldn’t be able to make it because his lungs weren’t developed,” Hedger said.

“I knew I didn’t do anything wrong, but still I felt guilty because it was my body that was not able to carry him,” she said. “And he would have been perfectly healthy otherwise, had my body done what it was supposed to do.”

This time, Hedger’s baby survived. But at 1 pound, 15 ounces and arriving Jan. 29 instead of the expected May 6 date, it was touch and go. For the next few months, Hedger and her husband practically lived at University Hospital in Cincinnati, where baby Karis slowly gained weight and strength.

Exactly what causes premature births and all of the factors that may contribute to such births have long baffled the experts. A research effort at Wright State University is aimed at shedding more light on the mystery and finding ways of predicting premature births through the use of technology and data analysis.

“There are databases we can mine to come up with some factors that can potentially be used to predict preterm birth or at least the risk assessment,” said Angus Acton, a Ph.D. candidate in biomedical engineering working under Tarun Goswami, a joint associate professor of biomedical engineering and orthopaedic surgery.

Acton said the Dayton area has a potential treasure trove of data from patient records because each year physicians see between 3,000 and 4,000 pregnant patients who are in their first trimester.
Acton is working on the project with Perinatal Partners LLC, a group of Maternal-Fetal Medicine Specialists located at the Berry Women’s Pavilion at Miami Valley Hospital.

Preterm babies are born fewer than 37 weeks into a normal 40-week pregnancy.

About 12.7 percent of all babies born in the United States are preterm, according to the March of Dimes. The organization says the rate has increased 36 percent in the past 25 years, partly because of an increase in elective cesarean sections, an increase in older mothers and the growing use of assisted reproduction, which increases the risk of multiple births.

Premature babies can face a number of challenges, including breathing problems because of underdeveloped lungs, undeveloped organs and greater risk of life-threatening infections, according to National Institute of Child Health and Human Development.

“Prematurity is horrible. We’re very much committed to trying to stamp that out,” said David McKenna, M.D., RDMS, clinical associate professor of obstetrics and gynecology and director of the Maternal-Fetal Medicine Fellowship Program at Wright State’s Boonshoft School of Medicine. McKenna is supervising Acton’s research.

McKenna said preterm births are difficult to predict because there are so many potential contributing factors. The size of the uterus, length of the cervix, contractions, and inflammation within the fetal membranes and placenta can all play a part, he said.

“We just don’t fully understand the interaction between inflammation and the mother’s immune system’s response to that,” he said. “That’s very complicated. And that’s something that’s being investigated all over the world.”

If early delivery could be predicted, McKenna said, doctors might be able to come up with better ways to prevent preterm births or be better prepared to treat the delivered baby.

“Prediction is crucial in coming up with any kind of intervention,” he said.

Acton’s study will also use near-infrared spectroscopy—which can detect changes in blood concentration—in order to measure oxygen levels in the placenta and/or water content of the cervix.

Acton said some studies suggest that oxygen levels are higher in the placentas of women who deliver preterm, because the fetus may be getting less oxygen. And cervical water content is known to increase significantly in a process known as cervical ripening, which can be an indicator of imminent labor.

Acton said the study may also investigate whether thermal imaging—which produces images based on temperature—can be used to detect infection in the uterus that can lead to premature rupture of the fetal membranes and subsequent early delivery.

“We’re trying to incorporate all of these new ideas into something that can potentially get results as far as prediction,” Acton said.
He is hoping to use some equipment at the Air Force Institute of Technology to perform the study.

Acton said the study is initially focusing on preterm birth, but the methods being used may also be helpful in investigating fetal anomalies such as low birth weight.

Hedger said such research could be very meaningful to expectant mothers or those contemplating having babies, especially for women who suspect they may give birth prematurely.

She said that after she had lost her baby and was leaving the hospital, she and her husband were questioning whether they would even have another child.

“You walked in there and you’re pregnant. You walk out and you feel nothing in the respect that you had this whole other person that was going to be in your family,” Hedger said. “You’re just in shock.”