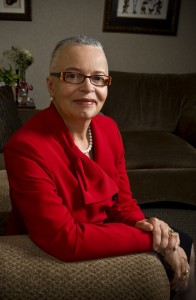 Dean Charlotte Harris was named to the Girl Scouts Hall of Fame Tuesday for being a Woman of Leadership.

Thin Mints, Savannahs and Tagalongs may get much of the attention this time of year from the Girl Scouts, but the organization’s regional chapter took some time out Tuesday to celebrate a Wright State University educator.

Charlotte Harris, Ph.D., dean of the College of Education and Human Services at Wright State University, was inducted into the Girl Scouts of Western Ohio, Dayton Region’s Hall of Fame at an awards luncheon at Sinclair Community College.

“It was a very nice occasion and I was very honored being a former Girl Scout,” said Harris.

One of three women from the Miami Valley recognized, Harris was named a Woman of Leadership and a role model for girls.

“I believe that leadership emerges and it is a product of nature and nurture,” said Harris. “I’ve been fortunate to be supported since childhood by a loving and encouraging family.”

Harris went to Girl Scout camp when she was young, earning swimming badges, among many others, and later becoming a lifeguard. She says those experiences helped nurture her leadership skills and played a major part in her growth.

Harris began her academic career in 1969 as an English teacher in Maryland. After holding various positions through her career, she joined Wright State in 2000 as a faculty member in the Department of Teacher Education.

Harris has served as chair of that department and now serves as the first female dean of the College of Education and Human Services.

Harris also currently serves as a Unit Accreditation board member on the National Council for the Accreditation of Teacher Education. She is a reviewer for the Section on Social and Institutional analysis.