Lake Campus will play a role in aerospace defense initiative 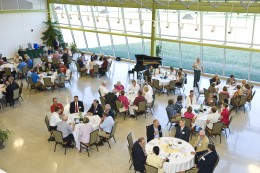 Hopkins delivered the “annual report to the community” at Lake Campus, speaking to about 100 university officials, students, business leaders and the Western Ohio Educational Foundation (WOEF).

Hopkins said Wright State has been tasked with creating the best aerospace curriculum, which will produce students prepared to fill these high-paying jobs.

“The Lake Campus will be a very significant partner,” Hopkins said. “This is about developing curriculum for project management, supply chain and logistics, aerospace systems engineering and more.” 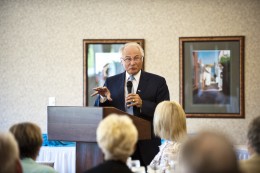 Hopkins underscored Wright State’s economic development efforts later at a gathering in Van Wert. “We must be part of the solution for Ohio’s economic doldrums,” Hopkins said.

Hopkins also said he expects the Lake Campus to benefit from a unique business model introduced July 18 in which Wright State will embed a faculty member with a company in order to accelerate the commercialization of research.

•     Helping secure a grant to strengthen agricultural education in the region’s high schools. “And we see so many opportunities to grow the curriculum at the Lake Campus,” he said.

•     Partnering in The Grand Lake Law Enforcement Academy, which culminates in the Ohio Peace Officer Training certification test and enables cadets to continue to work on bachelor’s degrees in criminal justice at the Lake Campus.

•     Making progress in offering a bachelor’s degree in mechanical engineering at the Lake Campus. Hopkins said he also hopes to grow a degree program in manufacturing and industrial engineering.

•     Graduating more than 225 students from the Lake Campus MBA program since it was established in 1997. “That has continued to grow,” Hopkins said.

Bonnie Mathies, Ph.D., dean of the Lake Campus, told the audience in her remarks: “We have been doing some great things up here.”

The WOEF will distribute more than $250,000 in scholarships to students attending the Lake Campus this fall. Several of those students were recognized at the gathering.

“We must be part of the solution for Ohio’s economic doldrums,” Hopkins said.

The event, which included members of the WOEF board, featured updates on achievements by Wright State partners Northwest State Community College and the Vantage Career Center.