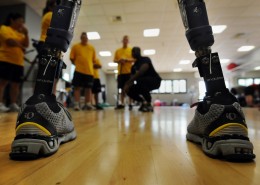 Artificial arms and legs can be the gift of freedom for military veterans who have lost limbs. They increase mobility and can even help veterans excel in sports and recreational activities.

And prosthetics have come a long way. New materials have made them stronger, lighter and more realistic looking. Electronically controlled limbs have also become common.

But there’s a little-known drawback to prosthetics. They trap body heat. And as the temperature builds, sweat can pour into the joint, causing skin rashes, blistering and general discomfort.

A team of Wright State student researchers is determined to fix that. The students are working on a new design they plan to soon present to officials at the Dayton VA Medical Center, which has 500 hospital beds and provides a full range of health care to veterans.

Since World War II, more than 26,000 U.S. veterans suffered the loss of limbs during military service. In 2008, the VA manufactured or repaired prosthetics for 12,059 veterans.

“We have a pretty decent population in this region that is using this facility to get sockets,” said Tarun Goswami, joint associate professor of biomedical engineering and orthopaedic surgery at Wright State. “Our job is to try to solve one of their problems: make a more durable design and at the same time take away the sweat and temperature increase.”

Goswami’s student researchers investigated the issue, in part by speaking to a few amputees at the Dayton VA who consented. The contacts occurred as the students shadowed Tim Shafer, a prosthetist, and viewed some prosthetics equipment.

“When talking to the patients, there were some expectations that they really wanted us to focus on,” said Wright State student researcher Paige King. “A lot of it had to do with temperature control. Whenever they were really active, they would experience a lot of moisture that would build up in the liner.”

King said patients also wanted improvements in the skinning-rubbing edges of the socket and possibly a self-adjusting feature to minimize visits to the hospital for refittings. One patient asked for a single socket that could accommodate different attachments to help him pursue his active lifestyle.

On Feb. 17, Goswami and his researchers met at the VA with Tim Gasson, chief of Prosthetic Service; Nick McCray, administrative officer for research and development; and a prosthetics manufacturer to deliver a progress report and brainstorm ideas.

Student Sarah Caup said the research team is looking at developing a liner out of Gore-Tex material that would allow water vapor to escape and not return. Another possibility, said student Chris Ferguson, is a liner with an air-permeable sleeve and a vacuum pump as well as sensors that would monitor the condition of the limb.

Caupp said yet another approach is making the socket out of innovative materials such as elastin-like protein polymers.

“Elastin is found in your skin, so it’s something that’s very bio-compatible,” she said. “And the tensile strength of the silk is very strong.”

Ferguson said the researchers also tested a battery-powered plate that could be installed in the prosthetic to reduce the temperature.

“I like the idea of it being controlled by the patient,” said Gene McQuinn, president of PSMCo, a Dayton company positioned to produce any device designed by the students. “You would have some kind of dial-type thing, like a thermostat. I think maybe that would have some potential.”

Goswami suggested that the students also look into designing a prosthetic that would make contact with the skin only at certain points, creating cooling pockets of air.

“It’s interesting to see what you’re coming up with,” said McQuinn. “You’ve got about a half a dozen different things going on here. Maybe you can tie some of those together.”

The researchers said they may create a design that incorporates a number of the temperature-control ideas and other improvements. They hope to file for patents and produce a prototype that can be tested.