He felt the speed and the wind in his face. But he didn’t feel like he was falling. 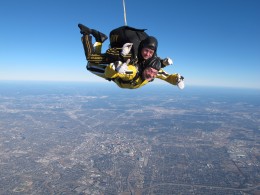 The 65-year-old Dregalla had never jumped before; never even thought about jumping.

But he got his chance after being nominated by Wright State Army ROTC Commander  LTC Maria Emery and then invited by Major General Jefforey Smith, U.S. Army Cadet Command Commanding General, to be the university’s representative at the US Army All American Bowl.

University and community educators and leaders are among those invited to the annual game for outstanding high school football players to build meaningful and lasting relationship with their U.S. Army counterparts. The relationships enable the Army to help these leaders in strengthening young Americans mentally, emotionally and physically.

Among the activities for VIPs swirling around the game were target shooting with the U.S. Army Marksmanship Unit and skydiving.

“I thought, ‘That’s a cool thing. I’m going to try to do that,’” Dregalla recalled.

So on Jan. 6, Dregalla donned his skydiving gear and hopped aboard a twin-engine otter for a tandem jump. He buckled himself to a Golden Knight, and the two duckwalked their way to the aircraft’s open, six-foot-wide door.

“You’re first on the door, with your toes hanging out; that was the only scary part,” he said.

“The most interesting thing is that there was absolutely no perception of falling,” Dregalla said. “There’s a 120 mile-an-hour wind hitting you in the face and you have a definite perception of going fast, but not of falling.”

The two were in a free fall for about 45 seconds before the chute opened.

“The only time you’re aware of the ground is as you’re really getting close. But by then, you’re floating down,” he said. “It was a gorgeous day. You could see everything.”

After a soft landing in a field, the whole thing was over. Dregalla said he would definitely do it again.

“It was an amazing experience,” he said.