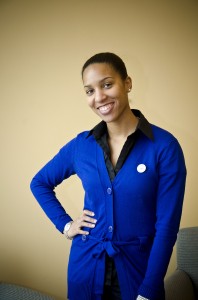 Ciara Black believes her journey has made her an advocate of college and believes in sticking it out even if it seems too tough.

The odds of going to college seemed stacked against her.

Ciara Black grew up in a tough Columbus neighborhood, where skirting crack houses and drug dealers were part of her daily walk to school.

Raised by a single mother on disability, Black remembers the humiliating wait for the government checks.
“I hated having to wait for the money to provide my livelihood to come in the mail,” she said. “That has contributed to some of my work ethic.”

That work ethic—and a strong push from her mother—led Black to academic excellence in high school, a scholarship to The Ohio State University and a bachelor’s degree in political science and African and African American Studies.
Today, the 26-year-old works for Wright State University’s assistant vice president for student services and is on the verge of getting her master’s degree in student affairs in higher education.

“Upon graduation, I hope to become a voice for underserved students as a student affairs professional, the same as those who were voices for me and believed in my ability to succeed,” she said.

In the sixth grade, Black won a scholarship offer from the Ohio State Young Scholars program, designed to help first-generation college students from low socioeconomic backgrounds. Students who maintain at least a 3.0 GPA through high school can receive a full, needs-based scholarship to Ohio State.

Black attended Eastmoor Academy, an alternative public high school in Columbus that held an enrollment lottery for prospective students and offered a strong college-prep program. The lobby boasted an academic hall of fame featuring photos of its top students.

“From the time I started, I kind of wanted my picture up in the lobby area,” recalled Black, who was among the graduates with the highest grades.

Since no one in her family had ever attended college, Black didn’t have a roadmap at Ohio State. She wasn’t sure what to expect, didn’t know what classes to take, and was uncertain how to fit in to the college culture.

“I had to kind of learn on my own,” she said. “It was character building, for sure.”

Near the end of her sophomore year, her mother fell ill. So Black moved back home to care for her along with the support of some other family members. After obtaining her degree, Black worked as a family case manager at a child welfare agency in Columbus.

“In that role, I determined that I really wanted to help people and to help people from non-traditional backgrounds,” she said. “I also figured out I wanted those to be college students.”

So Black embarked on her master’s at Wright State in student affairs. She is conducting research on single-parent students and works as a graduate assistant to the assistant vice president for student services.

Black tries to ease the entryway into college for non-traditional, first-generation students, like she herself once was. She helps advise students, assists former foster children with housing and other issues through the Independent Scholars Network Program, and helps with the planning and implementation of Parents & Family Weekend and First Weekend events.

“It is a unique blend of my previous work as a social worker and higher ed,” she said. “My experience has shaped what I want to do for others.”

Black said Wright State does a great job of working with its students.

“I see more help here with the developmental side of students as they are walked through the steps of decision making,” she said.
Black said her journey has made her an advocate of college and believes in sticking it out even if it seems too tough.

“I definitely feel I’ve been blessed by people at Wright State who have seen something in me and have given me an opportunity,” she said.